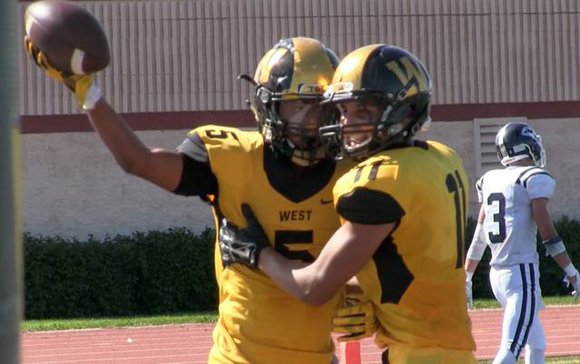 With a little over two minutes to go in the first half and down 3-0 on fourth down and goal, Joliet West (1-1) was trying to keep Plainfield North (1-1) from punching the ball into the endzone from just a yard out. The Cougars handed it off in a power formation to running back Veshawn Ward who was met with a mountain of Tigers preventing him from scoring and turning the ball over on downs.

Just two plays later, the momentum swung completely in the direction of Joliet West. Quarterback Jaxon Aubry dropped back and hit wide receiver Terrence Neal over the middle on a short pass, which turned into an 85-yard touchdown and a 6-3 Tigers lead following a failed two-point conversion.

“That was the game-changer right there,” Joliet West Head Coach Jason Aubry said.

The Tiger’s second score came on a touchdown pass from Aubry to wide receiver Alec Vonch. After that score, Joliet West led 12-3 but that was all the offense needed, as Plainfield South was not able to score a touchdown.

Joliet West nabbed three interceptions including two from junior defensive back Arthur Hart, both coming in the fourth quarter. Hart’s first came as Plainfield South was again marching and threatening close to the redzone but quarterback Nicholas Deppe’s pass into the endzone went right into Hart’s hands. Hart’s second pick came just a couple of minutes later on a diving effort to essentially end the game.

“Our d-backs came up huge in the second half,” Aubry said. “Arthur Hart played a heck of a game…very happy with our defense.”

The win is Joliet West’s first as a member of the Southwest Prairie Conference, which it joined this year. Next week, West will welcome Oswego (2-0) on Saturday Sept. 10 at 1 p.m. Plainfield South will travel to rival Plainfield Central (0-2) on Friday Sept. 9 and will kickoff at 7 p.m.

Joliet West defensive back Arthur Hart (5) celebrates his first of two interceptions in his team’s 12-3 win over Plainfield South on Saturday Sept. 3.