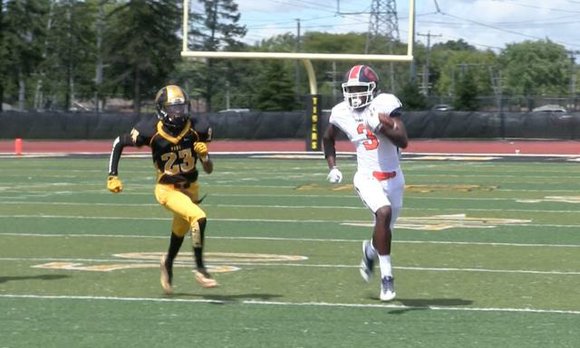 After an ugly 7-3 loss against Oswego (3-0) on Saturday, Joliet West (1-2) Head Coach Jason Aubry told his team to not hang their heads. The Tigers defense had its most impressive showing to date holding one of the best two teams in the conference to one touchdown and barely any offensive success.

Unfortunately for Joliet West, its young offense was not able to get much going as well. The Tigers barely were able to make it into the red zone and put up the fewest points the team has scored this season.

“We’re right there,” Aubry said. “We’re very close. I told (the team) at the end I hate losing, especially these tight games.”

The Panthers got on the board in the first quarter with a short touchdown run by running back Anthony Grimes. The Tigers then drove down the field in a hurry in the second quarter and came away with a Matthew Prieboy field goal to make it 7-3. That was the extent of the points production for the day.

Still, the Tigers defense had the best collective performance against one of the only remaining undefeated teams in the conference. Joliet West picked off a pass and recovered a couple of fumbles and gave multiple chances to the offense. After allowing Oswego East (3-0) 49 points in Week 1, Joliet West has allowed 10 points in the last two games.

Aubry reminded his team that, while the result was not the one they wanted, the performance was one that should give them hope. Joliet West has three more opponents on the schedule who have yet to win a game.

Up next, Joliet West travels to Romeoville (0-3) and Oswego welcomes Plainfield East (2-1). Both games will take place on Friday at 7 p.m.