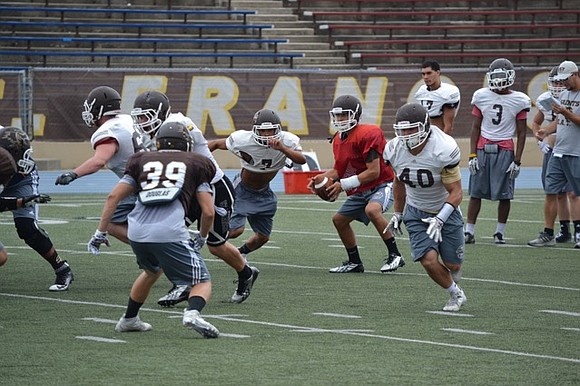 The Fighting Saints (1-2) won its first game of the season against Missouri Baptist 38-14 on Saturday on its last of a three-game road trip to start 2016. Sophomore wide receiver Tyrell Mitchell scored two of the Saints’ five touchdowns. Junior quarterback Don Butkus went 22 of 31 passing for 210 yards and led the Saints with 77 rushing yards on eight carries.

Saint Francis broke its three-game winless streak and improved to 2-2-1 so far in 2016.

The Lewis men’s soccer team lost 1-0 on a header goal by Missouri S&T’s Unnar Ulfarsson in the 107th minute on Sunday.

The Flyers and Miners both recorded 16 shots but Lewis was edged out 8-6 on shots on goal. Lewis is now 1-5 overall and 0-4 in conference matches.

Despite tying the match on two occasions, the Saint Francis men’s soccer team fell short against Calumet College of St. Joseph 3-2 in the CCAC opener for both teams at Joliet Memorial Stadium.

Junior Nick Miller scored his first goal of the season in the 31st minute and junior Mohamed Rashid added another off of a free kick in the 55th.