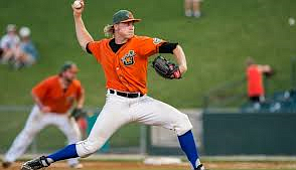 The Joliet Slammers presented by ATI Physical Therapy are excited to announce another Slammer has signed with a Major League organization. On Monday, September 19, Slammers’ pitcher Kaleb Ort signed with the Arizona Diamondbacks. The announcement follows the signing of Slammers outfielder Charlie White to the Chicago White Sox early last week.

League and first in professional baseball. Of his 20 games played during

innings he pitched. Ort earned Frontier League Pitcher of the Week in June

after recording wins over the Washington Wild Things and Schaumburg

Ort grew up in Lowell, Michigan and attended Aquinas College. In college,

Ort was a two-way standout as a pitcher and outfielder.