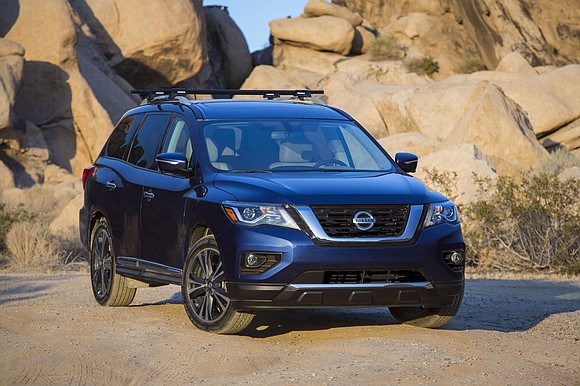 Nissan’s Pathfinder has been around for 30 years and in that time 1.5 million copies have been sold. The refresh of the fourth generation Pathfinder was more than the addition or subtraction of a little chrome or changing a crease here or there. Everything between the bumpers was touched.

Designers updated the styling by giving the 2017 Pathfinder Nissan’s V Motion grille with boomerang shaped headlights and LED daytime running lights. The sport utility can also be equipped with LED headlights. The hood, front bumper and fog lights were all enhanced. Rear changes included new taillights and a stronger bumper. The three row utility vehicle had a more rounded yet aggressive look.

Under the hood was a new 3.5-liter direct injected V6 that made 284 horsepower and 259 pound-feet of torque. It was mated to Nissan’s third generation continuously variable Xtronic transmission that simulated shifting.

Nissan said the 2017 Pathfinder can tow 6,000 lbs. And though they added more power to the engine, fuel efficiency was unchanged. The Pathfinder gets an estimated 20 mpg in the city, 27 mpg on the highway and 22 mpg combined for the two-wheel-drive version.

Nissan tinkered with the Pathfinder’s driving dynamics. The automaker said the Pathfinder is the only utility vehicle in the class with selectable two-wheel drive, Auto or four-wheel drive lock modes.

It also has an all mode 4X4-I system. It lets the driver choose full-time two-wheel drive for maximum fuel economy, Auto mode to automatically monitor conditions and adjust the torque between front and rear wheels for the best traction or four-wheel drive lock mode.

We did a really short test drive of the Pathfinder on the hilly two lane roads in this valley. It’s on road characteristics were very good. It was quiet, except when climbing and we hardly noticed the CVT. About the only thing to quibble about was engineers could have or should have used more sound proofing to keep engine noise at a minimum when ascending.

Nissan retuned the Pathfinder’s four-wheel independent suspension to offer improved body control. The shocks absorbers were 11 percent stiffer in the front and seven percent stiffer in the rear. Rebound springs were added to the front struts to help with roll balance and body control. The spring rate of the rebound springs in the rear was increased 25 percent.

They also revised the hydraulic electric power steering system. The steering ratio was 11 percent quicker. All the refinement resulted in the 2017 Pathfinder having little bounce, pitch and roll and it remained flat in the corners and in the curves and there were plenty. In a phrase, the three row sport utility didn’t drive big; it was very manageable on the road.

The 2017 Pathfinder has new driver assistance technology is how Nissan phrased it. There was forward emergency braking and intelligent cruise control. Moving object detection has been added to the optional around view monitor. And there was blind spot warning and rear cross traffic alert.

There are four trim levels of the Pathfinder: S, SV, SL and Platinum. The second row seats unlatched and glided forward for easy access to the third row. There was also interior ambient lighting which we didn’t get a chance to test because the test drive was in the morning.

The 2017 Pathfinder had a comfortable and functional interior. The dash seemed lower and that let in more light. Connectivity was improved by giving the vehicle two USB plugs versus just one in the old model. There was a new generation information display between the odometer and speedometer. Voice recognition was enhanced by a new microphone. And the vehicle had an automatic tailgate; just stick your foot under the rear bumper.

Of course, the 2017 Pathfinder can be equipped with Bluetooth, satellite radio, a navigation system, dual panoramic roofs, with one over the third row seats and voice controls depending on trim level.

Prices start at a shade less than $30,000 without freight charges.