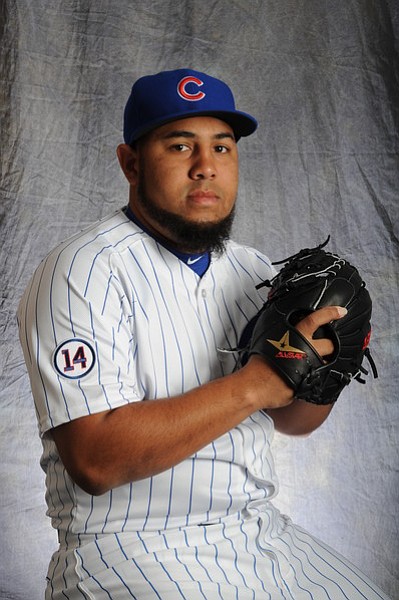 excited to announce the Slammers 2017 roster is starting to take shape. The

addition of Joseph Ortiz, a former Chicago Cubs prospect, may help the

Ortiz, a native of Caracas, Venezuela is entering his first season with

the Joliet Slammers. He spent his 2016 season pitching for Tiburones de La

Guaira of the Venezuelan Winter League. He was originally signed as an

undrafted free agent by the Texas Rangers at the age of 16. Ortiz pitched

in 32 Major League Baseball games for the Rangers in 2013. He also pitched

for the Chicago Cubs’ Triple-A affiliate, the Iowa Cubs, in 2015.

healthy,” said Manager Jeff Isom. “We are looking at him to anchor our

pitching staff. He could be a starter or a receiver for us- that is still

up in the air. But to get a pitcher with experience that Joe has, it’s

exciting for our club. He is one of four players to play in the major

leagues and come to the Frontier League.”

The Slammers also have some local products making their Frontier League

debuts this season. Zach Jones, a Northwestern graduate from Glenview,

will be playing outfield and first base for Manager Jeff Isom.

Maxwell Biedrzycki, a graduate from the University of Illinois in

Springfield and native of nearby Plainfield, will be adding some depth to

Justin Kovalsky, a graduate of Judson University and native of

Bolingbrook, will be helping Isom’s infield depth as he can play both

catcher and third base.

Returning from last year’s East Division championship team is Marc Flores. Flores joined the Slammers in the second half of the 2015 season. In 2016, he played in 95 games and had 12 home runs and 62 RBIs. He was selected in the 30th round of the 2014 MLB draft by the Chicago White Sox.

The 2017 Frontier League Tryout Camp and Draft will be held April 24-25 at GCS Ballpark, home of the Gateway Grizzlies. All 12 teams will be present, along with scouts from multiple MLB franchises.

The Slammers open the 2017 season on the road on Friday, May 12 against the Lake Erie Crushers. They return home on Tuesday, May 16 against the Traverse City Beach Bums for the home opener. Individual tickets go on sale Monday, April 17. Groups and season ticket plans are on sale now. For more information call the Slammers Box Office at (815) 722-2287.

The Joliet Slammers presented by ATI Physical Therapy play at the Slammers Stadium downtown Joliet, Illinois, and are members of the professional, independent Frontier League. The Frontier

League is a 12-team league entering its 25th season of play in 2017. Visit the Slammers online at www.jolietslammers.com or call the ticket office at 815-722-2287 for more information! Don’t forget to “Like” the Slammers on Facebook at www.facebook.com/jolietslammers or follow them on Twitter at @jolietslammers!