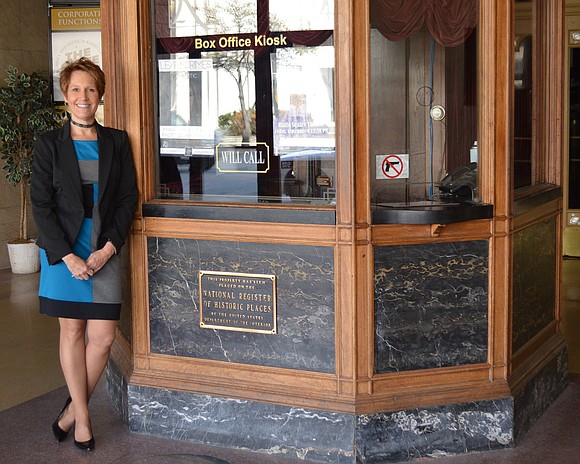 Valerie Devine, executive director of the Rialto Square Theater in Joliet. Photo by Brock A. Stein

As she steps in to the role as the new Executive Director for the Rialto Square Theatre, Valerie Devine hopes to provide the steady leadership the 90-year-old landmark has needed and to inject some of her self-described charm and personality into making the operation run smoothly in the coming years.

But first she has to sell her home in DeKalb, contend with the daily 90-minute-plus commute, and find a new place in the Joliet area for herself and her dog to call home all while getting up to speed on everything she needs to know to make the theater successful.

“Just getting to work every day is an accomplishment, “ said Devine with a laugh noting that she’s been spending her first week on the job meeting with staff, the theatre’s foundation, and other members of the community before “digging in to the nuts and bolts” of running the theater.

Compared to the tumultuous 2016 that the Rialto Square Theatre has had over the course of the past year, the personal challenges facing its new Executive Director seem minor. In 2016, the theater saw its former executive director Randy Green resign in disgrace for not paying payroll taxes, weathered numerous looming debt calamities, a standoff with City of Joliet officials over funding and saw the mass resignation of its entire governing board at the end of the year.

Devine worked in Aurora where she spent 13 years as vice president of production, booking shows for the 8500-seat River Edge Park.

She became interested in coming to work at the Rialto when she watched some of the impassioned speeches that community members made on behalf of the theatre at some of the Joliet City Council meetings last year.

“It almost didn’t feel like a building, it felt like a person that they were talking about,” she said.

She said that the theater’s staff has been focusing on booking more shows in recent months and would continue to work on encouraging more community involvement as they “figure out what our next step is.”

That, she said, will help the theater, its staff and community “work together as a team and as a well-run machine.”

Part of feeling like part of the team also involves Devine pulling up stakes and selling her house of 17 years in DeKalb. She said making the move to Joliet is important for a couple of reasons.

“I feel it finally opens up the door for me to become a part of the community in which I work and live,” she said and that the move was important because “I think you make different decisions when you have a vested interest in the outcome.”

Living nearby will also help with the odd hours that people who work in the entertainment industry keep she said and will save her time on the road to and from DeKalb.

“I won’t be punching the clock and leaving the area,” said Devine, “that really is exciting to me.”