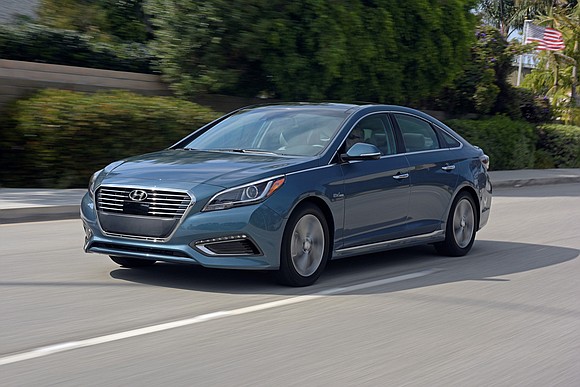 Quietly, Hyundai has entered the world of electric vehicles. With its 2017 Sonata Plug-in Hybrid, the Korean automaker now offers what it called a class-leading 27 miles of electric-only range.

The reason we say silent is that we haven’t heard much about the midsized front-wheel drive sedan. Hyundai said because of its extended electric only range, consumers will be able to complete their daily commutes without using any gasoline. The car had a total range of 590 miles.

The powertrain package was comprised of a six-speed automatic transmission with a 50kW electric motor in place of a torque converter which allows electric vehicle operation at a higher engine load and speed.

There was a 2.0-liter four cylinder direct injected gasoline engine that produced 154 horsepower and 140 pound-feet of torque; the total system made 202 horsepower. The car had a 39 mpg combined range in gasoline only mode and a 99 MPGe range in plug-in hybrid electric mode (PHEV).

The Sonata Plug-in Hybrid was quiet. It reacted well to driver input. We think because of the six-speed transmission, it had pretty good acceleration; shifts were soft but decisive and the suspension was obviously beefed up to carry the extra weight of the battery, electric motor and regenerative brakes.

About the only thing we found to quibble about was that the steering seemed a little loose. There could have taken a little more torque to turn the wheel. Yes, we know it sounds nutty but sometimes it can be too easy to turn the steering wheel, in other words, steering can be loose and that was the case with the 2017 Hyundai Sonata Plug-in Hybrid.

Hyundai said the Sonata Plug-in Hybrid’s drag coefficient was an industry-leading 0.24. There were small design cues that distinguish the hybrid Sonata models.

Inside, a distinctive instrument cluster provided additional information about the Plug-in Hybrid’s functions. A charge indicator was located on top of the dashboard to make it easy to see the state of charge from outside the vehicle.

A storage bin was at the base in front of the center console. It held two 12V plugs and a USB jack and an auxiliary jack. The shifter was on the center console with the HEV, drive mode and parking assist buttons. There was also an auto hold button for hills.

We climbed into the back seat; there was plenty of head room and lots of leg room. Because it was a front-wheel sedan, the drive shaft tunnel was minimal. That means a third person could have sat back there, making the middle seat manageable. There was also a third 12V socket at the base of the back of the center console.

The 2017 Hyundai Sonata Plug-in Hybrid was technology advanced for less than $40K. Our tester’s sticker said $39,610.