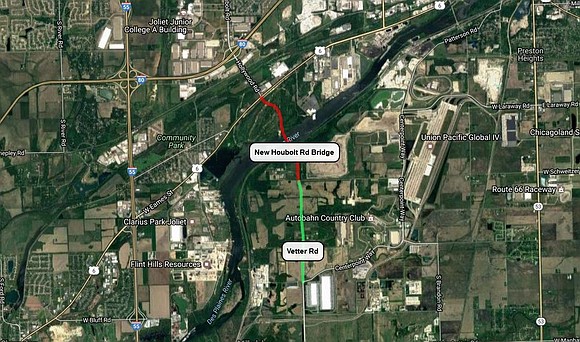 Map of the proposed bridge on Houbolt Road in Will County. Scribble Maps.com

Plans are moving ahead for road improvements on a planned Houbolt Road bridge and new interchange on I-80 in Will County.

One of the partners in the public/private project, the City of Joliet, approved a contract with Transystems Corporation this week to oversee the phase 1 and 2 engineering of the interchange portion of the project.

The state and Will County announced last year an agreement with Center Point properties which will pay for the engineering and construction of a bridge at a cost estimated to be between $155 to $175 million. That work will include the extension of Houbolt Road between U.S. 6 and Schweitzer over the river with a four-lane toll bridge.

The city revealed in September last year that any funding above the $21 million pledged by IDOT would be the responsibility of Joliet tax payers.

The initial cost of the contract with Transystems is for $1.93 million, just under the $2.1 million estimate.

Hock said that Transystems will act on behalf of the city to select the engineering company that will complete the project due to an uptick in development projects that require city engineers’ attention.

“With the economic development that’s going on [in Joliet] the engineering department can’t afford to lose another internal staff member,” said Hock on Monday.

Hock said that the city has used Transystems for its recent phase 1 engineering for the re-opening of Chicago Street downtown and was not at work on phase 2.