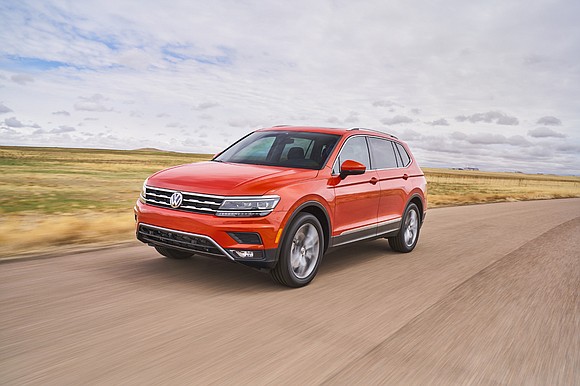 The drive route took us through the city streets here. The Tiguan did not dwarf other vehicles on the road. Its traffic manners were acceptable. Sight lines were good, it was not so big as to creep over lane lines, setting off the alert and acceleration from traffic lights was pretty good.

From the passenger seat, there was not much road noise, wind noise at street speeds was non-existent and importantly the engine was not working hard. Before we forget, the stop-go system was smooth and it restarted the engine quietly.

The Mile High City is a slogan but it is also fact, the elevation here is 5,280 ft. And we think Volkswagen’s selection of this city was significant. They never said so but the elevation showcased the 2018 Tiguan’s power, particularly the low end torque of the “updated” four cylinder engine.

We made it to Baseline Road and then to Flagstaff Road and on to Gross Dam (gravel) Road. It was all up. These were two lane aggregate surfaced streets that were comprised of tight turns, switchbacks and breathtaking views that would make you gulp for air literally and figuratively.

It was here that we had the chance to take some notes on the 2018 Tiguan’s interior. Like everything about the new Tiguan, it was straightforward; the infotainment screen was flush with the dashboard mimicking a smart phone or iPad.

The climate controls were under the info screen housing, the face of the dash was soft touch and two large circular instruments with a TFT screen between them were in front of the driver. There were control buttons along each side of the gear shift template in the center console. But at this elevation it wasn’t wise to take our eyes off the road for too long. This is where we could hear when the engine started working harder.

From there, the route got rougher, literally. We turned onto a gravel road, Gross Dam, where the turns were even sharper, there was less grip because it was all gravel and sometimes the surface was so undulating that it mimicked that of a washboard.

There wasn’t any twisting in the chassis, steering was accurate, the brakes were good and the engine worked even harder but it wasn’t straining. This was the most difficult part of the route. The Tiguan got up and over sharp hills, around switchbacks and its braking on steep declines happened without causing any alarms.

However, this road was where we wished we had been able to get an all-wheel-drive Tiguan for a better feel of the back end. There were a couple of places where we heard a ticking in the engine, like an old diesel, and earlier in the drive the engine ran a little rough. We attributed it to the engine having not warmed up yet. Also, these vehicles were early production models since at the time of the drive; the 2018 Tiguan would not go one sale for two-months or in mid-summer.

And we both thought that Volkswagen didn’t have to do this: layout such a challenging drive route for the 2018 Tiguan. But that’s what you do when rebuilding the brand. The eight-speed transmission was solid and sure, it never hunted for a gear once and there was plenty of opportunity for missed shifts during this drive.