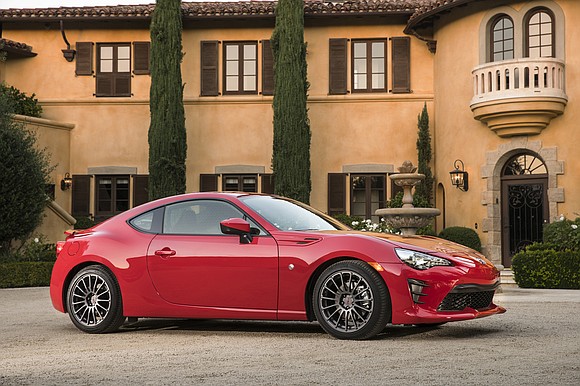 Toyota is billing its 86 as “the Affordable, Fun-damental Sports Car.” We can’t argue with that description. But first let’s be clear. The Toyota 86 used to be the Scion FR-S in this market. The 86 nameplate was used on the car in other markets, meaning other countries. Now, as Toyota terms it, the FR-S transitions back to the Toyota brand in this market.

Translation, when Toyota discontinued the Scion brand because it had done its job, the company decided to keep most of its models. And in the case of the 86, fun loving drivers are better off because of the move.

This car was a throwback. It mimics the small mostly British roadsters of the 1950s that had names like MG and Triumph. Those cars were small and had great weight to power ratios. And that meant oomph, not the blood curdling kind but they were quick and agile.

For track driving and autocross competition, Vehicle Stability Control (VSC) can be put in Track mode or shut off completely.

This rear-wheel-drive sports car was quick and it handled well. It had a low center of gravity and it was a traditional sports car; in other words we felt just about every bump in the road and we enjoyed every thud.

In the press material, Toyota said the 86 sports car adopts more aggressive styling with a larger center intake emphasizing the low, wide stance of the car. The front of the car has a new high-tech design with standard LED front headlamps, daylight running lights, and turn signals, a new fog lamp bezel and revised bumper. The rear sports LED tail lamps and more sculpted bumper design with integrated aerodynamic diffuser. The alloy wheels feature a new twisted spoke design and 86 logos have been incorporated into a badge on the front fender, as well as inside the front headlamps.”

Technically, the Toyota 86 was a 2+2 but anybody would have to contort themselves just to set a couple of grocery bags back there. And the automaker used something it branded “Granlux on the instrument panel surround. It felt and looked like felt.

This was a no-nonsense straightforward car. There was no smart key, no satellite radio, no navigation system, no heated seats and forget about cooled. Thank goodness they used anti-glare rear and sideview mirrors or nighttime driving would have just been cruel. Sitting low to the ground like it did, the Toyota 86 would have picked every headlight on the road in its mirrors.

There were USB and auxiliary jacks thus; the car could play music from a smartphone or a flash drive. And there was voice controls which was humorous since there was little to control.

Instruments were comprised of three circles inform of the driver: the odometer, the speedometer and the third contained the fuel gauge and the temperature gauge. And indeed, the Toyota 87 was a global car. There was a button to change the digital speed readout to kilometers per hour or miles per hour.