Will Co. Sheriff’s office and complex ahead of schedule

Construction to finish in December 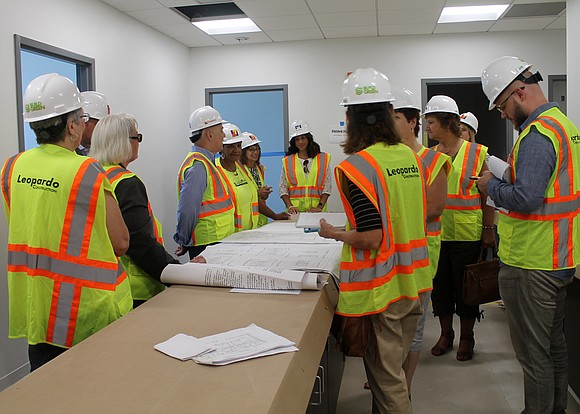 Joliet— Members of the Will County Board toured the new Public Safety Complex this week as the building enters its final phases of construction. Construction is slated for completion in December, and some offices will move into the building as soon as September 1, 2017.

“It’s exciting to see the building take shape after so many months of planning and deliberation,” said Ray Tuminello (R-New Lenox), Chair of the Capital Improvements Committee. “Everyone has been working hard and is eager to see the Complex open in December.”

Members of the Capital Improvements Committee, as well as other board members, attended the tour. Board members were able to walk around the main public lobby, offices, server storage, and the new main dispatch room on the first level. On the second level, board members had the opportunity to see progress on the sheriff's office and the new training room.

"The new Public Safety Complex will house some of the County's most important safety facilities, such as the Sheriff's office and the 911 Dispatch Center," said Lauren Staley-Ferry (D-Joliet). "Consolidating everything in one centralized location will help keep operations efficient and the residents of Will County safe."

Construction on the Public Safety Complex began in October 2016, and was initially estimated to be completed by March 2018 at a cost of $29.5 million. The building should be complete three months early, in December 2017, thanks to an accelerated contract, great weather, and local labor.

“I’ve been very impressed with the security and technology,” said Minority Leader Herb Brooks (D-Joliet). “We have really increased the speed of how we process people. It's great to see this new Public Safety Complex will be a high quality facility. Construction ending a few months early is an added bonus.”

The new Public Safety Complex will house the Sheriff's Office, 911 Dispatch Center, and Emergency Telephone System Board (ETSB). The 85,000 sq. ft. facility is located in Joliet on Laraway Road and Route 52. It will replace the existing Sheriff's Office next door and provide a new administration and training building, evidence storage, and space for a consolidated 911 Dispatch Center that will serve 30 communities, as well as ETSB. Currently, there is a need for a central location for these functions that are now spread throughout the County. Once the new complex is complete, the old Sheriff's Office will be torn down.

In August of 2013, after many years of deliberation, the Will County Board approved a comprehensive plan for major capital improvement projects throughout the County. Completion of the Public Safety Complex will herald the construction of a judicial complex in downtown Joliet on the southwest corner of Ottawa and Jefferson Streets. The County purchased the former Midwest Bank building in late 2014 to accommodate the Sheriff's operations until they move into the Public Safety Complex. Right now, this move will be ahead of schedule to allow the county to stay on schedule for the new courthouse.

Photo 2: Board members inspect blueprints for the Public Safety Complex. Offices will start to move into the building by September 1.