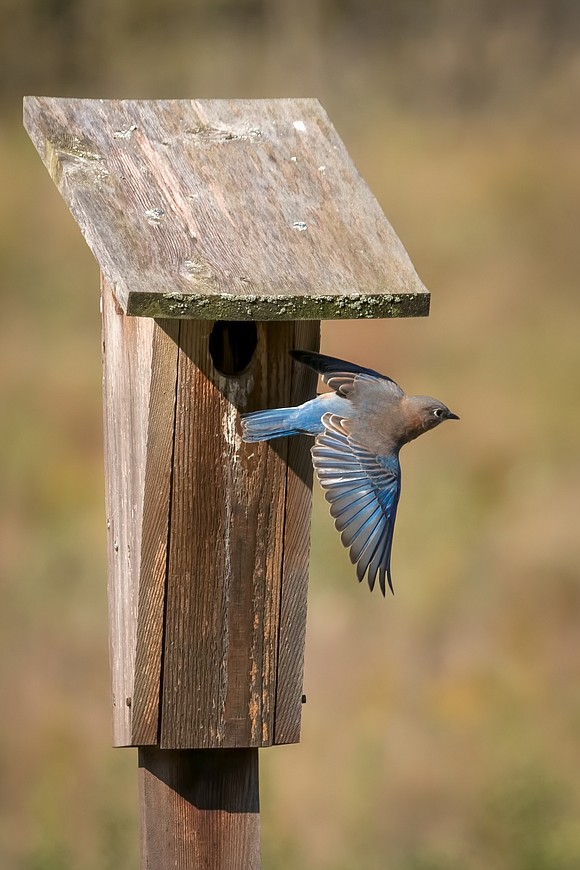 A weathered bluebird house and its fine-feathered occupant won the November portion of the Forest Preserve District's Preserve the Moment photo contest.

The photo of an Eastern bluebird in midflight leaving its home was taken by Frankfort resident Michael Fagan at Hickory Creek Preserve. Fagan said he lives just a few miles from the preserve and he loves taking photos of wildlife, plants and landscapes on his walks.

November's photo contest category was structures, so any man-made structure located in a preserve was fair game.

Photos that earned honorable mention were taken by: Brian Keller of Joliet for a Rock Run Preserve bridge railing with deep orange hues and contrasting shadows; Janet Keller of Joliet for a leaf-strewn walkway with splotches of sunlight at Hammel Woods; John D'Agostino of Homer Glen for the Isle a la Cache's Native American longhouse nestled in nature; and Chuck Medrano of Mokena for the sun peeking through a beam on the Centennial Trail Bridge.

Only one more month remains in the contest. December's category is open, so any type of photo can be submitted, as long as it was taken in a Will County forest preserve after the contest began on May 1. One winner will be chosen after the December 31 deadline and that entry will join the seven monthly winners that have been chosen since the contest began.

Once the 2017 contest concludes on December 31, all eight monthly winners will compete for top honors via public voting on the District's Facebook page, Facebook.com/WillCoForests. The top three vote-getters will win prizes: a messenger-style bag for first place, a digital photo frame for second place and a Michaels gift card for third place. All who enter will receive a participation gift.

For more information on contest rules and instructions, visit ReconnectWithNature.org/preserve-the-moment-contest-rules. To see all of the photo entries, visit Flickr.com/WillCoForests.