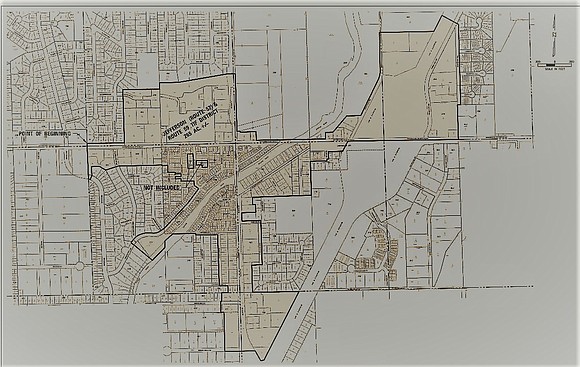 During a public hearing held this week, Shorewood officials heard details of a phase 2 Tax Increment Funding (TIF) district study that the village commissioned in 2016. Village trustees will hear a first reading of an ordinance establishing the TIF district at their February 14 board meeting.

The proposed district includes about 265 acres of land along with 349 parcels centered near the Route 52 and 59 intersections.

According to the study, the area consists of mostly commercial, retail and mixed use properties including one residential property.

The study cites the area as being a prime spot for redevelopment but notes a predominance of older structures and unsuitable lot layouts.

“The area has long been an economic engine for the Village but is falling into disuse and in some instances neglect.,” the study reads.

Mary Thompson, a vice president with Kane, McKenna & Associates which conducted the study, said that the establishment of the TIF could help kick start “commercial and retail uses” in an area with a number of “underutilized” properties.

“When you do that it contributes significantly to the health of a community,” she said.

Thompson said that the area also suffers from vacancies, access issues in some retail spaces and a library “that’s kind of buried.”

Other factors cited in favor of the TIF, includes a decrease in equalized assessed values in properties for 4 of the last 5 years, a need for flood prevention measures and a need for upgraded infrastructure in some of the properties.

Once created, tax rates are frozen and remain constant within a TIF district for as long as 23 years. During that time, any increases in property value and the resulting difference from the tax revenue increase would be directed to a TIF fund to be reinvested in improvements in the area. Property taxes don’t increase in the TIF district and property tax revenue continues to be distributed to the supported taxing bodies. The taxes generated from the increased property values would be distributed to the taxing bodies at the end of the TIF’s lifespan.

The high-traffic area is included in the village’s riverfront master plan and is considered a gateway to the village.

Ground was broken in the fall last year on the land at the northwest corner, known locally as Anderson’s corner, where the former Baba’s Restaurant once stood. The property is owned by the family of Dan Anderson who is also a village trustee.

Plans for the re-developed land include the construction of a 5,800 square foot anchor building, added parking in the rear, and updated facades and a drive through on the two existing strip mall buildings that face Routes 52 and 59.

Since a flood in 1996 that destroyed several homes, the village has also been buying up property south of Route 52 along the DuPage River creating open park space with an eye toward further public use.

The TIF funding mechanism is a popular tool for redeveloping areas that have become blighted or rundown.

In nearby Joliet, the city recently voted to move ahead with the creation of a TIF district for the 110-parcel area surrounding St. Joseph Hospital.

The Joliet TIF is expected to generate approximately $17.95 million in reinvestment funds and will address a shortcomings including a lack of community planning, overcrowding of structures, inadequate parking, sidewalks and access to right of way.

The city has indicated that funds could be directed toward improving public infrastructure as well as the surrounding streetscape, landscaping, and signage.