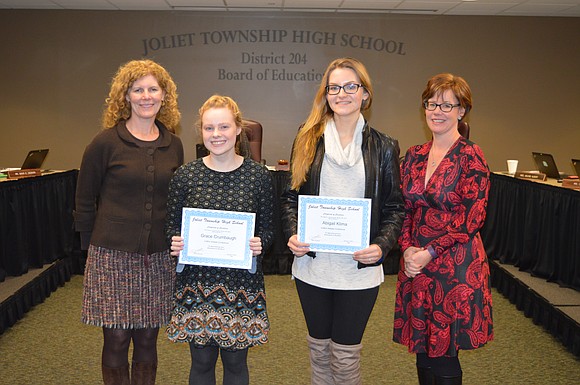 Students were recognized by the JTHS board in January.

During the JTHS Board of Education meeting on January 17th, Joliet Township High School proudly recognized students who received All-State recognition from the Illinois Music Education Association, as well as the staff members that helped them achieve this honor.

These students auditioned for the District Festival ensembles, and were chosen from amongst over 300 students across the state in their respective categories to represent District 1 at the All State Conference. They had to place in the top one and a half percent in order to be chosen for this recognition.

Central Choir Director, Mr. Jones shared that this year is especially historic because this is the first time ever that a Joliet Township School will be represented in both the ILMEA All State Chorus and the All State Vocal Jazz Ensemble.

The following students and staff were recognized:

Grace Crumbaugh (Joliet West, Class of 2017) has been a member of the choral program each of her years at Joliet West. In addition to the choir, Grace has been a lead in opera scenes productions of “The Pirates of Penzance”, “Hansel and Gretel”, “The Mikado” and musical productions “The Music Man”, “Into the Woods”, and “The Light in the Piazza”. In March she will be playing the role of “Ella” in “Cinderella”. Grace is a member of the Tri-M music honor society, where she has served as a soloist in multiple recitals. This is Grace’s second year as a member of the ILMEA District choir and her first as a member of the All-State Honors Choir.

Abigail Klima (Joliet West, Class of 2017), is currently principal flute in the Symphonic band. She is on the leadership team for the Marching Tigers, is a member of the Tri-M National Music Honors Society, has been a member of the Musical Pit Orchestra, and performs in West’s top jazz ensemble. Abi has been a member of the ILMEA District I Band for the past two years before being selected to All-State this year. Abi will be joining the Marines upon graduation and will be a part of their music program.

Moises Garcia: (Joliet Central, Class of 2017) serves on the leadership team of the New Era Gospel Choir, the bass player for the Show Choir, and sings in the Joliet Central Chamber Choir. He has also participated in musical productions for three years. Most recently, he was the student director for the musical Guys & Dolls and played the role of Nicely Johnson.

Tyrique McNeal – (Joliet Central, Class of 2017), although Tyrique McNeal could not attend the Board Meeting, JTHS is very proud of his musical accomplishments and celebrates that he was selected for the ILMEA All State Vocal Jazz Ensemble for his second year. Congratulations!

Timothy DeBoer and Eric Wellman, of Joliet West High School, and Joliet Central educator David L. Jones were also recognized for their important contributions to the musical enrichment of JTHS’s students and community.