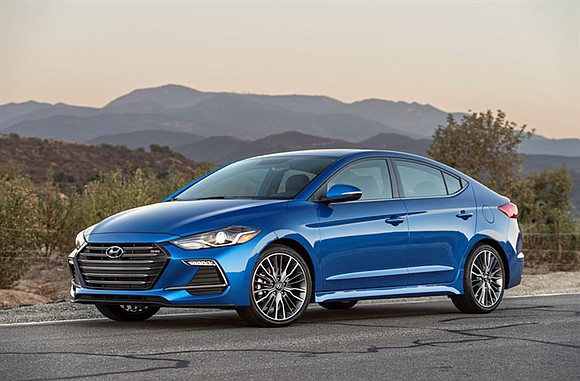 The first thing we noticed about the 2017 Hyundai Elantra Limited was the ride. It rolled down the streets smoothly and quietly, tamed the bumps and lumps in the road and it was easy to steer.

The 2017 version of the Hyundai Elantra was lighter than the outgoing model. More than half of the chassis was comprised of advanced high strength steel. Its use resulted in an increase of almost 30 percent stiffer torsional rigidity which improved the ride as well as the car’s handling.

Hyundai really invested time and money in improving the quality of the 2017 Elantra. The company increased structural adhesive application 40 times more at higher stress points on the chassis and to reinforce welding areas.

We took the car for a quick weekend trip the Chicago; about 275 miles from here, and the result of the chassis improvements could be felt in the Elantra’s road manners. The car tracked well; there were no steering wheel adjustments to keep it in the lane. It was quiet because the improved chassis rendered less NVH and it was easy to drive, sight lines were clear.

The 2017 Hyundai Elantra was powered by an Atkinson Cycle 2.0-liter four cylinder engine that made 147 horsepower and 132 pound-feet of torque. It was mated to a six-speed automatic transmission. The combination got 28 mpg in the city, 37 mpg on the highway and 32 mpg combined.

In real world driving, we topped off the tank and headed to Chicago. When we arrived, there was still half a tank of gasoline left. The Elantra has a 14 gallon fuel tank. Using some really rudimentary math, we divided 7 into 275 and came up with 39.3 miles per gallon. That is respectable, actually better than respectable gas mileage.

We thought the interior was filled with functional and cleanly styled instruments that were easy to use. It was a horizontal layout, no center stack which automakers are moving away from. We had leather seats and the front pair was heated; the driver’s side was power.

There were two USB plugs, one at the base of the infotainment screen and the other inside the center console. There was an auxiliary jack and 12 volt plug. The car had Eco and Sport drive modes but it was so smooth in normal mode we didn’t even bother to try either of the other two. The information TFT screen pointed us toward the nearest gas station.

We found two things to grumble about during our week-long test drive. The cup-holders were too shallow. Mildly aggressive driving or a sharp turn sent bottled water tilting and almost falling out of the cup-holders. With a loose top or no top that and other liquids would surely spill.

The 2017 Hyundai Limited also had a smart key. Approach the car and the FOB would not unlock the door but it would make it unlockable by pushing a button on the door handle. However, stand there for a moment distracted by whatever and that FOB would unlock the trunk. It occurred twice, thus, it wasn’t a fluke.

Back seat space was impressive. There was plenty of headroom, legroom was good and hip room wasn’t an issue with two people. But put a third body in the second row and things would get cramped. But this Elantra could carry four adults comfortably.

There was an impressive array of features. The usual culprits were a navigation system, voice controls, backup camera, and moonroof and satellite radio. The not so usual equipment were a lane keep system, smart cruise control, autonomous emergency braking, forward collision warning and rear traffic alert. There was also a self-diagnostic system.