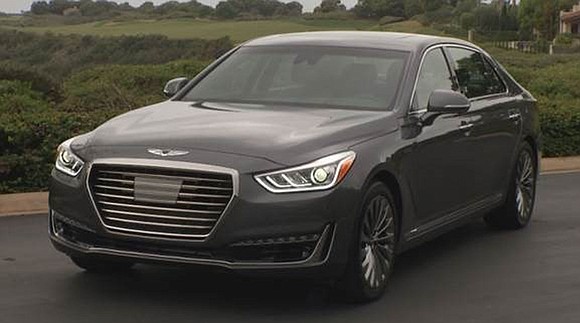 Consumers will decide whether Hyundai has bitten off more than it can chew. In the wake of its success in the market here, the Korean automaker decided to break off its top of the line Genesis model and move it further upscale creating a new luxury brand in the process.

There are pitfalls galore in this decision. In effect, Hyundai has to generate name recognition for a new brand and two new nameplates in a market that is inundated with them: Genesis the brand and the G-series which now consist of the G80 and the G90. Getting name recognition in a cluttered market is a tall order.

Success depends on spending enough money to reach the right customers. But the most important component is, if the plan is to be successful, the car. And an initial report is that it appears that Hyundai got that right.

We had the 2017 Genesis G90, which is the flagship sedan of the new luxury brand. The guts of the matter started with a 3.3-liter dual turbocharged six cylinder engine that made 365 horsepower and 376 pound-feet of torque. It was mated to an eight-speed automatic transmission with paddle shifters.

There is a V8 powered G90 but the V6 was more than adequate. This engine was quiet, efficient and it lent some athleticism to the G90. Acceleration was great from mid-range speeds of 40 mph to 70 mph. It was a case of not letting the car get loose and finding yourself contributing to the coffers of the city treasury through speeding tickets.

Handling was what you would expect of a long-wheel-base luxury sedan. The ride was smooth, it was quiet and it was precise. The G90 stuck to the driver-selected track and acceleration seemed effortless.

The G90’s competitive set is the top tier luxury sedans from German automakers and Japanese luxury automakers. It looked the part sporting a prominent hood with short overhangs, long wheelbase and a distinctive rear deck. The face of Genesis has been dubbed the Crest grille crowned with the winged Genesis badge.

Of course, there were LED running lights and chrome accents and 19-inch alloy wheels. An arching character line ran the length of the car ending at the rear where dual exhaust tips were integrated into the lower bumper. Hyundai said the car had a 0.27 coefficient of drag which was the best in class and enhanced its fuel efficiency.

The 2017 Hyundai Genesis G90 had an EPA rating of 17 mpg in the city, 24 mpg on the highway and 20 mpg combined. That doesn’t make it a gas sipper but no gasoline powered car in the full-size luxury sedan segment is fuel efficient. The realization is evident with a big, powerful and stately luxury sedan.

And with all things, no matter how they look on the outside, luxury is conveyed on the inside. There were loads of real wood accents, leather stitched instrument panel and the premium audio speaker grilles were machined from stainless steel in the G90.

Genesis has opted for conventional dials in a horizontal layout with a mixture of high tech gadgets. The center console held all the controls sort of elevated on an angle to make them easy to read and to reach save the audio dials which were directly under the vent and the clock which were centered in the dash.

There was also a control module in the armrest in the back seat. It controlled the front passenger seat, the audio system and seat articulation. In other words, the G90 is conducive to being driven by a chauffeur with the car’s owner sitting in the back seat with some command functions.

One of Hyundai’s strengths is offering more for less and that has not changed with the Genesis brand. Our test car included automatic emergency braking with pedestrian detection, driver attention alert and smart blind spot selection. We were doing something we should’ve not been doing, wavered outside the lane more than once a gentle chime went off and there was an emblem in the TFT screen suggesting we stop and get some coffee. The car thought we were falling asleep.

Of course there was a navigation system, voice controls, a 360 degree camera system and the infotainment screen showed three different visuals when needed. Put the G90 in reverse and the screen had an overview, the rearview camera view and the navigation screen.