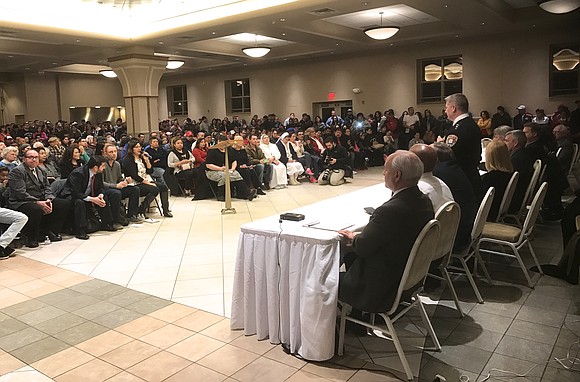 Joliet Chief of Police Brian Benton addresses the crowd at a special meeting for concerns about immigration law and enforcement. Photo by Alex Ortiz

JOLIET - A few hundred people piled into the Mt. Carmel Church in Joliet for a special meeting of the Joliet City Council to address concerns in the community about immigration issues. The city organized the meeting in light of the recent immigration debate and concerns about deportation. There are also questions about designating Joliet as a sanctuary city for undocumented immigrants, which is a city that would officially limit its cooperation with federal immigration authorities just like the City of Chicago has done.

Still, some like Elizabeth Cervantes, the Director of Organizing of the Southwest Suburban Immigration Project of Bolingbrook and Romeoville, wanted the city council to reconsider taking on the label of a sanctuary city. She said Joliet’s policy is similar to other cities who have taken on the label.

“As far as I’m concerned, you’re already doing a lot of these things,” she said. “And I invite you to rethink the sanctuary notion where making a public statement on a sanctuary city would not be any different from what you’re already doing, which is really great work. And would only be able to tell the people that are not here in this room that Joliet is a safe place as far as the city is concerned.”

While O’Dekirk, the rest of the council and Chief of Police Brian Benton fell short of designating Joliet a sanctuary city, they did argue that it has been the policy of the Joliet Police Department to not do the work of immigration enforcement. Even if they handle issues like traffic violations, they do not ask for proof of citizenship or legal residency. If someone is suspected of a criminal offense overseen at the county level, they would then be detained at the county jail. It is only at that point that one’s immigration status is checked, according to Benton. He said the Joliet Police Department does not have the database to crosscheck immigration status.

The argument for sanctuary cities and those, like Los Angeles, who are not sanctuary cities but also state they do not do the work of immigration officials is that they simply do not have the resources, personnel and training for the job. It might also hinder the job of police officers by discouraging undocumented immigrants to come forward with information about a crime they experienced or witness for fear they might be questioned about their immigration status.

Still, the council and police chief wanted to make it clear the distinction between the power of municipal government, the county government and the federal government. Federal immigration agents can perform raids for undocumented immigrants without informing the local governments, and it has happened in cities around the country. So for those concerned citizens who were wondering what protections, if any, the Joliet police could provide, the answer was pretty much none.

But city officials did want to emphasize their concern with maintaining good relationships with the people of Joliet.

“Our Joliet police officers are here to patrol the streets of Joliet, to fight crime within Joliet and keep people safe within the city,” O’Dekirk said. “That’s their position. It’s always been their position.”

Immigration attorneys present also advised individuals with concerns about their status to:

-Contact an immigration attorney as soon as possible before a situation occurs and have their information on you at all times.

-Know that in case you are detained, who would be able to take care of your children if they are American citizens.

-Know you have a right to maintain silence if confronted by an immigration agent.

-If federal officials knock on your door without a warrant signed by a judge, you do not have to open the door. But if they do have a warrant, they have the authority to enter. You should give them your name, and that’s it.

For more information on the Southwest Suburban Immigrant Project, you can visit ssipchicago.org.