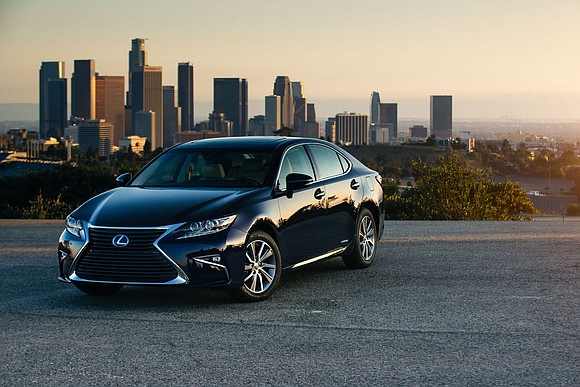 DETROIT – The saying that simplicity is a fine line between elegance and plainness came to as we test drove the 2017 Lexus ES 300h. It was simple, straightforward and pragmatic. Perhaps that’s why it is a bellwether of the Lexus lineup.

Yes, the car does have the brand’s spindle grille but beyond that it is pragmatic and reliable and in this case it was a hybrid. For 2017, the ES 300h was endowed with the company’s suite of safety features.

There were subtle design cues like a trunk lip spoiler, hidden exhaust pipe and blue hybrid badges. The sedan had a one-piece version of the spindle grille framed by satin chrome trim. Standard LED headlights give the ES 300h a distinctive face. Fog lights at the corners of the front fascia accentuated the wide stance. In the rear were L-themed taillights like the Lexus LS flagship sedan.

Under the hood was a 2.5-liter Atkinson-cycle four cylinder engine with an electric motor that made 200 horsepower. The car had a continuously variable transmission (CVT). This combination rendered an EPA rating of 40 mpg in the city, 39 mpg on the highway and 40 mpg combined.

This was a mid-sized sedan that fell just shy of full-size and 40 mpg was significant. After a week of driving our test car still had a half tank of fuel. We also found that the car had a little spunk. Lexus said it could get from zero to 60 mph in 8.1 seconds with the electric motor enhancing low-end torque.

Hybrids are notorious for being sluggish and somewhat loud (it’s the CVT). However, that consternation had been somewhat tamed in the Lexus ES 300h. It was extremely quiet while cruising and we could hear the CVT only during hard acceleration.

The car had a drive mode with eco, normal, sport selections and EV. But the electric mode was for really low speeds. We put the car in EV and pulled away from the traffic light, we didn’t get five feet before a message in the TFT screen between the speedometer and the hybrid system indicator gauge told us that we had pressed the accelerator to hard, thus, the engine started and we were back in hybrid mode.

But we were impressed with sport mode. The car got quicker which is never a bad thing in a hybrid. We didn’t bother with the eco mode, most of the time we stayed in normal.

That simple, pragmatic and to the point theme was carried over into the interior of the 2017 Lexus ES 300h. The infotainment screen was set back in the dash far enough that it could not be mistaken for a touch screen. Navigating that screen was done with a controller that was atop the center console. There too was the drive mode selector and the EV button to put the car in electric mode.