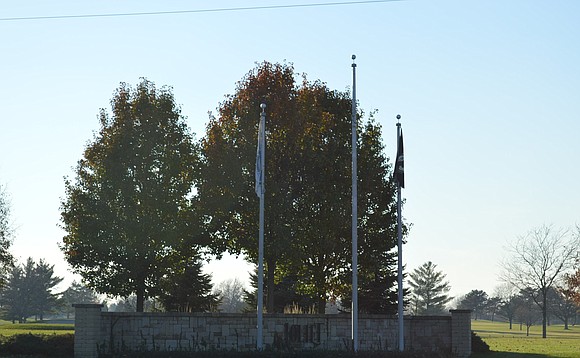 Joliet officials continue to work toward illuminating each of the 9 flag pavilions around the city.

City Manager Jim Hock said that 3 locations have lighting and will each include a new U.S. flag, MIA/POW and Tree City flags.

Hock said that the city was looking at late fall to hold a commemorative ceremony when the old flags will be taken down.

In addition, Hock told the city council that there were plans to create a space in city hall that will include a plaque for every soldier killed in action with a flag being displayed by the city “so everybody knows the location of where that flag is and where that soldier came from.”

Council member Brooke Hernandez Brewer said that she and fellow council member Larry Hug have been overseeing the progress on the project.

“I know we’re both looking forward to being able to get this on track and have those flags flying in Joliet again,” said Brewer.

Denise Meehan, a gold star mother whose son Pfc. Andrew Meari was killed in Afghanistan in 2010, told the council in November that she was “dismayed” that many of the flag pavilions still weren’t illuminated despite offers from volunteer groups to complete the work.

Of the 9 flag pavilions around town, 5 require some form of illumination whether it’s an electrical run or a solar powered light.

The pavilions that will require lighting includes the sites at the six corners intersection of Raynor Avenue, Plainfield Road/U.S. 30 and Black Road/Ruby Street; Hickory and Western; S. Larkin; South Chicago Street; and Route 59 (across from Kohl’s Department Store).

Illinois’ flag display act doesn’t describe requirements for illuminating flags that stay displayed overnight but federal code indicates that “It is the universal custom to display the flag only from sunrise to sunset on buildings and on stationary flagstaffs in the open” and “the flag may be displayed 24 hours a day if properly illuminated during the hours of darkness.”