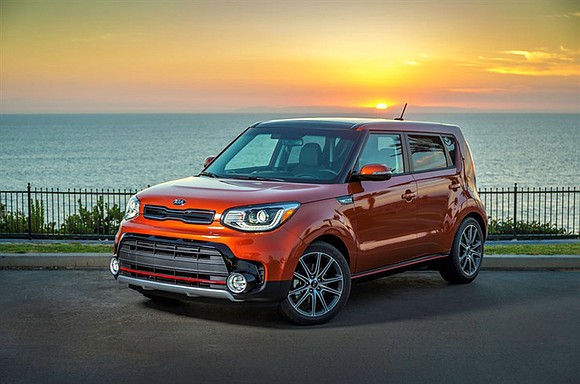 The Kia Soul has survived in a niche where many have failed. It is a square box yet stylish, sassy and it had a little bit of sex appeal. What’s more, this year’s edition was beefed up with added power.

For 2017, the Soul got a 1.6-liter turbocharged direct injection four cylinder engine. It made 201 horsepower, up by 40, and 195 pound-feet of torque, up by 45 and it was mated to a seven-speed dual clutch transmission.

Power not only went up but so did gas mileage. It had an EPA rating of 26 mpg in the city, 31 mpg on the highway and 28 mpg combined.

This engine gave the car some spunk and quickness. In sport mode, it was very quick, gear selection was faster and steering stiffened. The flat bottomed steering wheel made the car really easy to maneuver and it had a tight turning radius of 34.8 feet.

The Soul Turbo rode well. There was a little bumpiness to the ride but overall it was pretty smooth. Up front, there was a MacPherson strut front suspension and in the rear there was a coupled torsion beam axle. The car had gas shocks all round.

Because technically it was a crossover, the seating position was a little higher but that worked well. Sight lines were great. The Soul was spacious and functional.

Our test vehicle had a black on black in black interior with patterned seat cushions and backs. It was simply laid out. The infotainment screen dominated the interior. Different controls like phone, radio, media and the UVO system were on each side of the screen. The climate controls were beneath the screen and there was a 12 volt plug, auxiliary jack and USB jack beneath just that in front of a small tray.

The instruments were simple, straightforward and there was plenty of space between the odometer and the speedometer. And again, it was black motif reversed out with letters. There was a TFT screen between the two.

The start stop ignition button was on the corner of the gear shift console. We thought it surprising that there was another USB charging jack inside the console but on second thought, why not? This car was intended for the young at heart.

There was a third USB jack at the rear of the console for back seat passengers. The audio speakers were round and the bass speakers in the door had LED lighting which got a little brighter with every thump of the bass. It was a fun car.

The Soul Turbo had a bunch of creature comforts beginning with its glass roof which was a $1,000 option. The rear half was fixed while the front half opened. There were heated front seats and a heated steering wheel that could get a little hotter than comfortable at the three and nine points. But it was way better than ice cold and allowed for gloves off driving.

Even though the Soul had a slanted roof there was plenty of headroom in the rear seats and those seats were comfortable.

Our tester was outfitted with the technology package, a $3,000 option. It included a navigation system and premium audio system. Those speaker lights were part of the package as well as low beam projector lights, LED positioning lights and folding outside mirrors. The rear seats were heated and there was blind spot protection.

Fiddling with the setup controls, we found that when Bluetooth is hooked up to a smartphone, the car would call 911 when an airbag deployment was detected. Thankfully we didn’t experience this feature. And the car would also tell a smart phone where it was parked so that you can never misplace it.