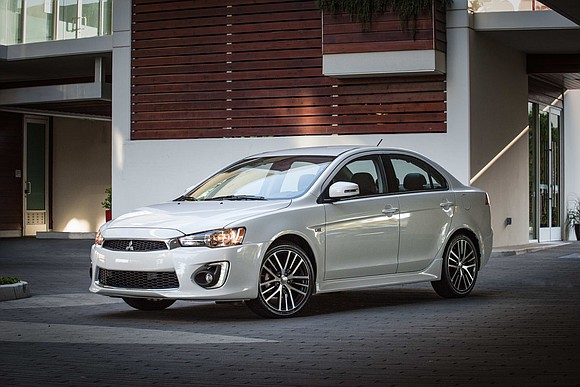 When you think of Mitsubishi, it’s a question of is the glass half full or is it half empty. It just might be tilting toward the former now that Renault Nissan has purchased a controlling interest in the Japanese automaker. But until the combination is ready to execute the new business plan, Mitsubishi must solider on with its current products. And they’re not bad.

We test drove the 2017Misubishi Lancer 2.4 SEL AWC and found it to be a nifty little sedan. It was powered by a 2.4-liter four cylinder engine that made 168 horsepower and 167 pound-feet of torque. A five-speed manual is available but we had the continuously variable transmission or CVT. This combination gave the car a fuel efficiency rating of 23 mpg in the city, 30 mpg on the highway and 26 mpg combined.

This engine was a gas sipper, it was relatively quiet and it had a little bit of oomph, especially in the midrange speeds of 30 mph to 50 mph. That’s the range when its CVT was most effective. In other words, acceleration was especially good which was excellent for urban expressway driving.

The 2017 Lancer had a wheelbase of 103.7 inches. This was enough length to prevent what amounts to hops when going over really sharp creases in the pavement. MacPherson struts in the front suspension and a multilink setup in the rear smoothed out the asphalt which was patchwork in some spots here. And there was a hydraulic power steering system that gave plenty of feedback. This Mitsubishi Lancer was a pleasure to drive.

Inside, there was a really clean layout even though the interior as one scribe said was mostly plastic. The car had push button entry but no push button start. Instead, there was an ignition switch; you just didn’t need a key to turn it. The fob apparently unlocked the unit, we turned it much like a keyed start-up and bam, the engine turned over and off we went.

Mitsubishi was an industry leader in terms of automotive technology. That was evident in the three-dialed climate controls. They were simple enough and nothing we hadn’t seen in the past. But what was new was that they could be set on automatic climate control.

The dash polymer was faced with a subtle pattern that echoed carbon fiber. And the lower center council template was piano black. But like any smaller inexpensive car the front seats were out of whack with the armrest and center console. In other words, the hip point made it difficult to rest your arm on either. That was about the only thing we didn’t like about the interior of this sedan.

The dash was textured but hard. Ironically the concaved middle of the door panel was soft touch, almost plush. It was strange but if you weren’t looking, it was pretty hard to notice. Still, the interior was spaciously wide.

The real surprise was the backseats. The cushions were soft. There was plenty of headroom and legroom was ample. We think three people could sit abreast in the rear seats without much of a problem. Even though our tester had a moonroof, there was plenty of headspace for someone almost six-feet tall sitting on the “hump.”

The 12.3 cu. ft. trunk held the subwoofer for the 710 watt, nine speaker premium audio system. Another surprising feature of the 2017 Mitsubishi Lancer was the SEL trim line that we tested was all-wheel-drive. The car could be switched to two-wheel-drive, which was front wheel drive, all-wheel-drive automatic and it could be locked into all-wheel-drive. There was no need to put the system to the test on dry pavement.

This Lancer had a touch screen, Bluetooth, voice controls, satellite radio and heated front seats. On this model, there was no navigation system. But for $24,430 as tested we didn’t complain about it. The 2017 Mitsubishi Lance was sound compact sedan.