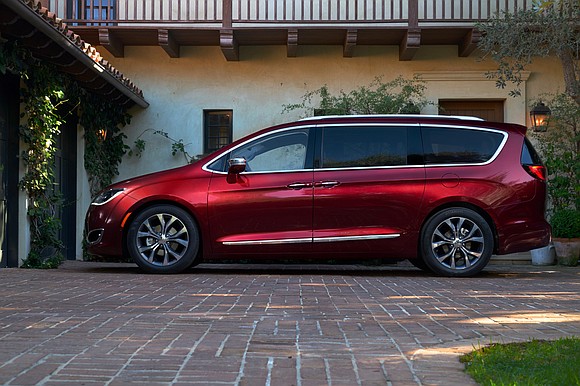 Game changer is a term used to hype products or events. They used it here to describe the Chrysler Pacifica Plug-in Hybrid. But it’s not just talk. Chrysler is right; the automaker’s new minivan is a watershed for people haulers.

By itself, the Pacifica is a move forward in the minivan realm. But to electrify it as Chrysler has done is a quantum leap. The 2017 Pacifica Plug-in Hybrid is the only Plug-in Hybrid minivan on the market. It is impressive.

The base facts: the Pacifica Plug-in Hybrid can get 80 mpge on a tank of fuel and it has a range of 530 miles. It can go 30 miles in electric only mode and it has a top speed of 75 mph as an EV. More than one Chrysler engineer who had taken it home for tests said they had gone weeks without visiting a gas station.

The retuned gasoline engine is paired with two electric motors powered by a 16-kWh lithium-ion battery pack. In the Pacifica both motors as well as the gasoline engine can put power to the wheels via an electric (continuously) variable transmission. The vehicle switched seamlessly between electric and gasoline modes or both depending on driving conditions.

This was a great driving vehicle. When in electric mode it was quiet and other than the silence there was no difference in its driving characteristics from a gasoline powered minivan as we traveled along surface streets to Malibu Pier for lunch. That was the other significant characteristic; the Chrysler Pacifica Plug-in Hybrid did not drive like a typical minivan. It was more like a nimble sedan.

We were somewhat surprised because the afternoon route took us through Topanga Canyon in the Santa Monica Mountains. This is not the place you’d expect to see a minivan. Two lanes, steep ascents, sharp curves and cutbacks prevailed as we climbed to Mulholland Drive and took a left.

The 2017 Pacifica Plug-in Hybrid was rock steady on the road, it was definitely quiet and its power at getting up those steep ascents was impressive. There was no sway in the curves and little compression in the suspension. The minivan’s ride was firm without being harsh even though the Plug-in Hybrid weighed 600 lbs. more than the gasoline powered Pacifica. The low end torque from those electric monitors more than compensated for the extra weight.

And some of that road stability came from where the battery was stored, beneath the floor where the second row stow and go seats would go. That lowered the center of gravity and it put the extra weight pretty much in the center of the chassis. The 2017 Chrysler Pacifica weighed almost 5,000 lbs.

One note is that those second row seats will come out. Coupled with the third row seats that stow into the floor, this minivan is still capable of creating a cavern for cargo.

We had just about expended the battery charge while driving in full electric mode in the morning and did not recharge the battery. In other words, the battery ran out of juice and the gasoline engine kicked in; that’s when the only downside of the 2017 Pacifica Plug-in Hybrid appeared.

The V6 Pentastar Plug-in Hybrid engine used different pistons, camshafts and valves than the gasoline model. Engineers had said the power plant had been tuned to get the best mileage but they wouldn’t say how much horsepower individual components made; that would be the engine and the two electric motors. All they would offer is that the three together totaled 260 horsepower. That means they took an engine that got 287 horsepower in gasoline configuration and depowered it for the Plug-in Hybrid. The bottom line is the Pacifica Plug-in Hybrid needs its electric motors for the additional torque and the oomph that goes with it.

Solution, install a 240 volt charger in your home to make sure the battery is juiced to send power to the electric motors. Whatever you spend on it you’ll recoup in saved gasoline costs. It takes two-hours to fully recharge the Pacific Plug-in Hybrid with a 240 volt outlet and 14 hours with a normal 120 volt outlet. Obviously, the former is preferential.

What’s more, the Pacifica Plug-in Hybrid has Plug-in Hybrid electric pages on its UConnect system. There is information like where power is flowing within the system, distance driven in Plug-in Hybrid or electric mode, scheduled charging times, vehicle range and estimated time to full recharge and it can locate charging stations.

The interior of the Chrysler Pacifica Plug-in Hybrid was just as refreshing. The greenhouse seemed encased in glass. The windows presented clear lines of sight all round. The seats were comfortable; the dash components seemed to float along the midriff of the car. It was nicely done and fit and finish was exemplary.

Little things like side few mirrors attached to the body rather than the A pillar accentuated the openness of the cockpit. And of course, the three panel panoramic roof aids greatly. That’s new and Chrysler said it is a first; there is now an open view above the third row seats.

It is hard to do something really new with the styling of a minivan. But Chrysler smoothed the exterior skin of the Pacifica. It looked like it and been carved out of one piece of metal rather than stamped from panels of steel. And Chrysler gets better and better at hiding the sliding door track lines. They were under the rear quarter side glass on the Pacifica.

The 2017 Chrysler Pacifica Plug-in Hybrid can be equipped with all sorts of comforts from a vacuum cleaner to a dual screen UConnect entertainment center in the rear seats. Available for the first time is a surround view camera system.

It had park assists, adaptive cruise control with stop and hold, a rotary gear selector, forward collision warning, lane departure warning, blind spot monitoring, rear park assist with stop and a rear back up camera. The usual suspects -- satellite radio, a navigation system and voice controls – were also part of the package.