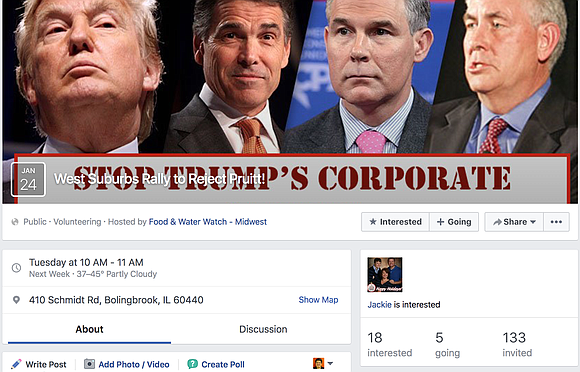 Facebook page for the rally against Scott Pruitt's appointment to head the EPA. 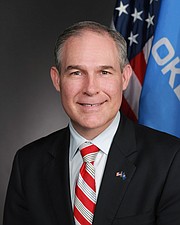 Here is what the event page on Facebook says:

"Scott Pruitt is dangerously unfit to lead the Environmental Protection Agency. He is a climate denier who has spent his career fighting and suing the EPA. This nomination must be stopped.

Join us at the West Suburbs Rally to Demand our Senators Reject Pruitt!

We will be rallying at James A. Boan Woods, taking photo petitions, and showing Senator Durbin that folks in the Western Suburbs want our environment protected under the next administration.

We'll then send off a contingent to the rally in Chicago to deliver all of our petitions to Durbin's office, encouraging him to reject Pruitt and pledge to protect the EPA. Information about the Chicago rally can be found here: https://www.facebook.com/events/1699723983650862/"

Pruitt served as the 17th Attorney General of the state of Oklahoma since 2011 and has called to turn back federal environmental regulations. Trump selected him to head the EPA on December 7, 2016.