Trump Speaks of Ending "Carnage" as He Enters White House 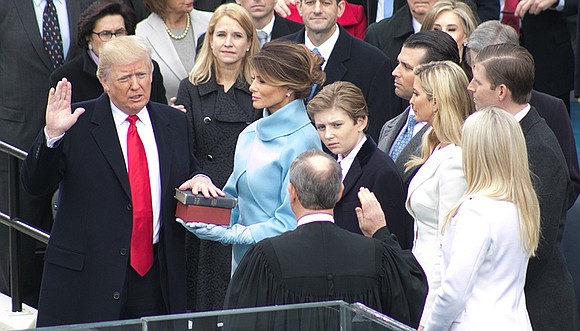 President-elect Donald Trump takes the oath of office during his inauguration at the United States Capitol on January 20, 2017. (Shevry Lassiter/The Washington Informer)

Donald Trump's inaugural address was heavy on nationalism and populism. It also was light on any attempt to bridge the divide between his supporters and those who didn't support him, thousands of whom marched in the streets at record numbers the day after his inaugural.

Speaking for 16 minutes, the new president made no attempt to reach out to those who did not support him though he received 2.8 million fewer votes than his challenger Hillary Clinton, the largest popular vote margin loss for any elected president in history.

Trump now enters office with the lowest approval numbers in history and failed to comment in any way on his predecessor, President Obama, during his speech. Trump did salute Bill and Hillary Clinton at congressional lunch after the inauguration ceremony.

"I'm very honored" the Clintons came to my inauguration Trump said in a rare act of graciousness unseen during the 2016 campaign.

But Trump also went on to further stereotype urban communities within a narrative of crime and problems as he often did during the 2016 campaign.

Trump told the crowd of dignitaries and other onlookers that America has, "an education system flush with cash, but which leaves our young and beautiful students deprived of all knowledge; and the crime and the gangs and the drugs that have stolen too many lives and robbed our country of so much unrealized potential. This American carnage stops right here and stops right now."

However, research shows that all crime, especially the murder rate, has declined over the last 20 years.

"It was the meanest lowdown speech I've ever heard," said Rep. Jaimie Raskin (D-Md.), a new member of the U.S. House.

“As I said previously, it is quite simply wrong for the president to use his position of power to continue to make racist, sexist, and bigoted statements that demean American citizens in order to score points with his political base,” wrote Rep. Alcee Hastings hours after the inauguration. “I will not play a part in normalizing divisive rhetoric that adds nothing to the critical conversations we face in the near future."

Hastings, along with 62 other member of the House, did not attend.

How Trump will actually govern no one knows. He enters office as the oldest and least qualified individual to ever become President of the United States. Trump is the first person to become president, who has never served in elected office or been a member of the military.

The Trump Administration also moved quickly to erase any mention of civil rights and healthcare from the White House.gov website. Trump has yet to meet with civil rights leaders and activists and has instead chosen substance and detail-free meetings with celebrities such as Steve Harvey, Jim Brown and Kanye West, none of whom could state in detail what exactly the results of the conversations were.

The Trump Administration already appears mainly focused on finding policy positions that are the opposite of what President Barack Obama mandated rather than carving out a specific identity based on unique ideas outside of that paradigm.

Lauren Victoria Burke is a political analyst who speaks on politics and African American leadership. She is also a frequent contributor to the NNPA Newswire and BlackPressUSA.com. Connect with Lauren by email at LBurke007@gmail.com and on Twitter at @LVBurke.