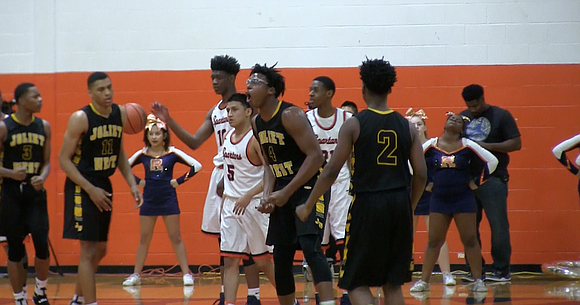 Joliet West's Tabyous Casterberry celebrates a bucket during his team's 69-66 win against Romeoville on Friday, January 27. Photo by Alex Ortiz

ROMEOVILLE - What a game.

The game started out with a back-and-forth with the upstart Romeoville Spartans keeping up with one of the best teams in the state. The Tigers almost lost a 16-point lead at halftime and was down a bucket with less than a minute to go. Joliet West pulled it out in the end though with solid free throw shooting, something that had eluded the team in its losses to Whitney Young and Bolingbrook, and came away with the 69-66 victory.

The Spartans pulled within one with two minutes to go. Romeoville’s Dontia Johnson put his team ahead 66-65 with 44 seconds left, but Bell managed to take the lead right back and secure the win with two key free throws.

Up next, Joliet West is at home next Friday against Plainfield East and Romeoville welcomes Oswego.