Slammers players selected to represent the East are Danny Zardon, Chaz Meadows, Juan Silva, and Luis Cruz. Danny Zardon and Juan Silva have been selected as starters for the East. Zardon began the season with the Philadelphia Phillies organization before signing with the Joliet Slammers. Zardon is batting .255 in 28 games for the Slammers.

Danny Zardon has also added 8 doubles, 4 home runs, and 21 RBI’s. Juan Silva was drafted by the Seattle Mariners in the 2014 MLB Draft and eventually signed with the New York Yankees. Last season, 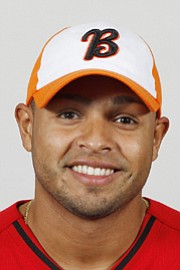 Silva played for the Yankees AA affiliate Trenton Thunder. Silva is currently tied for second in the Frontier League with 10 home runs and is tied for fifth with 35 RBI’s. This season, Silva is hitting .327 and has also stolen 7 bases.

Chaz Meadows and Luis Cruz have been selected as reserves to represent the East. Meadows is currently hitting .276 with 5 doubles, a triple, and 14 RBI’s.

Cruz is the lone Slammers pitcher selected to the Frontier League All-Star Game. On the season, Cruz is boasting a 3-2 record with a 2.73 ERA. Cruz has also struck out 31 opposing hitters in 29.2 innings pitched.

Tickets for the Frontier League All-Star Game and other festivities can be purchased over the phone by calling the Joliet Slammers at 815-722-2287 or online at jolietslammers.com.