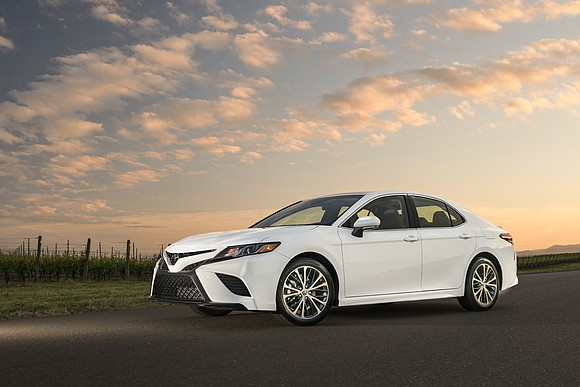 The redo of the Toyota Camry is a big deal. This car has been the best-selling midsize sedan in the U.S. for 15 straight years. It has attained benchmark status and now it begins a new life cycle with the introduction of the 8th generation.

Toyota’s product development cycle demanded that its best-selling car, a midsized sedan, be restyled in the middle of the hottest truck market in the history of the auto industry. Two-thirds of the vehicles sold are trucks of one sort or another and only one third are cars.

Thus, in order to maintain the Camry’s sales volume in a shrinking car market, Toyota must increase its overall share of the midsize car segment. That is a tall order, even for a premier automaker because all the entrees are good cars.

For 2018, Toyota started with a clean sheet of paper. In other words, they changed everything. The only carry over part on the new Camry, which goes on sale this summer is the badge. The bottom line is that the new Camry has to be a lot better than the old Camry and that’s tough since the old Camry was the best midsize sedan on the market. But they may have pulled it off.

Let’s start with propulsion. There were three either new or enhanced engines that provided more power and better gas mileage. The first was a new 2.5-liter four-cylinder engine that made 203 or 206 horsepower and 184 or 186 pound-feet of torque, depending on the trim package.

This engine got 29 mpg in the city, 41 mpg highway on the highway and 34 mpg combined. That is a 26 percent improvement for combined mpg over the previous model. It was mated to an eight-speed automatic.

The same four-cylinder was configured for 176 horsepower and 163 pound-feet of torque for the LE hybrid. It had a fuel rating of 51 mpg in the city, 53 mpg on the highway and 52 mpg combined, a 30 percent increase for combined mileage. The other two trim lines of the hybrid had a rating of 44 mpg on the highway, 47 mpg in the city and 46 mpg combined; a 21 percent improvement.

We tested all three engines during the course of the day on the streets and local highways here like Mountainview Drive, 99W, 219 and 240.

The four-cylinder gasoline engine was steady, quiet and really didn’t work all that hard to get up and over the hills here though they weren’t that elevated. It was a really easy driving car.

The six-cylinder was peppy, it lent a fun to drive element which we never associated with the old Camry. But the four-cylinder hybrid made us raise our eyebrow a bit because we found that engine a little loud; that’s definitely not a hallmark of Toyota. However, it may have been because the engine was cold.

We never tried the manual shift aspect of the hybrid’s CVT. As for the eight-speed automatic, it was smooth, we never heard it shift and it never hunted for the right gear.