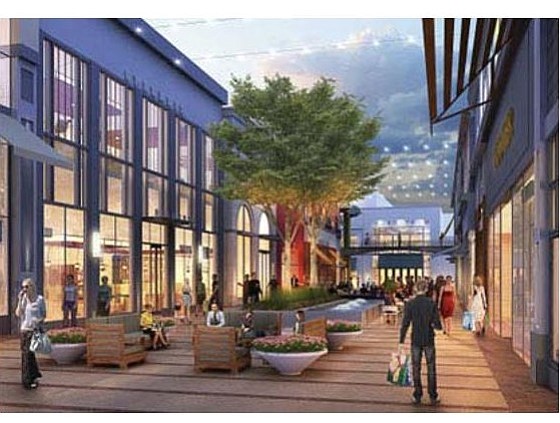 Concept art of Innovation Pavilion, a business incubator in talks to build a campus in downtown Joliet. City of Joliet

The City of Joliet has finalized and approved a framework agreement with a business incubator that wants to build a high-tech campus downtown.

Innovation Pavilion, which operates a similar operation in Centennial, Colorado, is looking to expand into suburban cities near larger urban centers with an eye toward attracting millennial workers with innovative and entrepreneurial business plans.

According to a city memo on the plan, the campus will consist of eight key elements including a conference center space, corporate suites, a shared space

Millennial housing which will consist of small 400 square foot apartments with plenty of shared community spaces.

CEO Vic Ahmed told the council on Monday that the STEM school would be a joint venture with local school boards and would be hosted in area schools and libraries with an eye toward training the next generation of students versed in high-tech innovation.

“STEM is at the center of it all because high-paying jobs are STEM jobs,” Ahmed told the council.

Creating a workforce versed in high-tech innovation and entrepreneurship would also create a draw for companies looking to hire those workers he said.

“Companies are going to go where they can find the [people] resources who have these skills,” he said.

Currently, he said, suburban cities like Joliet aren’t getting much attention for business models like the one he is proposing.

“We feel that the needs of the suburban cities remain unmet,” he said.

Under the terms of the plan, the city will provide one of two city-owned properties under consideration for the planned campus as well as $200,000 in funds which Ahmed called the “skin in the game” necessary to commit to the project. In addition, Ahmed said that the city would also provide a mix of tax and other fiscal incentives as well as support from community leaders for the project.

Economic Development Director Steve Jones said that the city will work out the details of the tax and other fiscal incentives as the project gets closer to applying for a building permit. The project could still be a few years away from beginning construction he said.

Ahmed said that the plan to locate several of the innovation campuses around the country in underserved ring communities or suburbs was a “more modern day version of economic development” where businesses are grown and talent is attracted to come live and work in close proximity to the campus.

The CEO said that the new model is aimed at a “ground shift” in the way that people of all ages view their careers and the move toward “a country of entrepreneurs” who are working toward starting their own companies rather than simply work for their entire careers for someone else.

He said that in addition to the STEM school the campus would also offer a re-skill boot camp program that would have students learn new, desirable tech skills in a matter of a few months that would get them ready to compete in the new economy.

The STEM program with the schools, he said, could launch as soon as the initial agreement is signed with the city.

Interim City Manager Martin Shanahan said that the city would commit to the incentives for the project once it is submitted for a building permit.

City council member Larry Hug said that by the time the company applies for a permit to build they will have committed to engineering and architecture fees “well in to the six figures.”

“That is a complete commitment,” said Hug who noted that he was glad to see that both properties being considered are in the city’s special service area and TIF districts. That will mean that the $200,000 financial commitment from the city would come from those special funding sources and not the city’s general fund.

“That’s exactly what SSAs and TIFS are designed for is to improve or attract development for that area,” said Hug who noted that the properties won’t be tax exempt and will eventually generate property taxes for the city.

Photo caption: Concept art for Innovation Pavilion, a high-tech incubator, that the City of Joliet hopes will attract millennial workers and new business to the downtown.