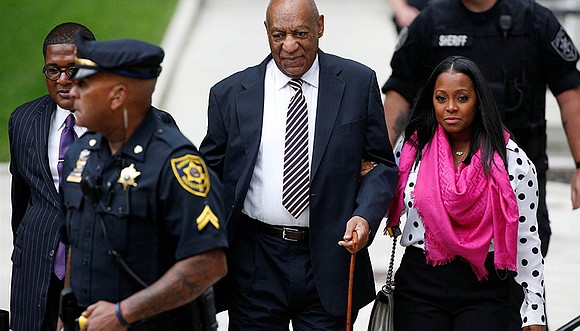 NORRISTOWN—On the first day of the Bill Cosby sexual assault trial, Kristen Feden, a Montgomery County, Pa., assistant district attorney, said that Cosby’s own words, taken from police statements and a deposition, would be powerful evidence against him, including his acknowledgment that he used Quaaludes to have sex with women.

“These three friends will help you relax,” Feden quoted Cosby as saying to Andrea Constand.

Pointing to Cosby—even walking over to the defense table only inches away from the fallen entertainer—Feden referred to him as “this man” while describing his alleged actions with Constand, a former Temple University employee; Feden said that Cosby gave Constand pills, then assaulted her.

Feden said that Constand viewed Cosby as a trusted mentor and said that the case would be defined by, “trust, betrayal and the inability to consent.”

The assistant district attorney also warned jurors not to be “distracted” by Cosby’s celebrity as she pointed and jabbed fingers at the comedian and told the jurors that the man, once known as “America’s Dad,” was a rapist.

When Cosby’s lead attorney Brian McMonagle, presented jurors with his opening statement, he noted that he once was a prosecutor and that he was glad to represent Cosby, because he’s seen both sides and the “Let’s Do It Again” actor was innocent.

“They saw there was no evidence to bring a prosecution then,” said McMonagle, referring to the Montgomery County District Attorney’s office, run by Bruce Castor, who decided, in 2005, that there wasn’t enough, “credible and admissible evidence," to file any charges

“So, why are we here?” McMonagle asked.

McMonagle hammered home points about Constand’s inconsistent statements and her relationship with Cosby, before and after the alleged incident.

Then, in what proved to be the first bombshell of the case, McMonagle cited telephone records that show 72 calls between Cosby and Constand after the alleged January 2004 incident. A staggering 53 of those calls came from Constand, not Cosby, McMonagle said. “Yet, she told police initially that she had not tried to contact him. The conversations lasted 20 minutes, 30 minutes, or more.”

McMonagle continued: “You see a comedian who made us smile; somebody may see a flawed husband whose infidelities made him vulnerable to these accusations. Some of you will look over there and see a man and see someone who has seen greatness and someone who has suffered unendurable personal tragedy. I hope you will see just a citizen.”

Kelly Johnson, a former William and Morris Agency employee whose late boss worked for Cosby, was the only witness called to testify on the first day of the trial.

Johnson testified that Cosby first wooed her and her parents—including her stepfather, a former Los Angeles Police Detective—then drugged and sexually assaulted her.

“My dress was pulled up from the bottom,” she said, “and it was pulled down from the top.”

However, on a dramatic cross-examination, McMonagle highlighted various inconsistencies in Johnson’s statements and, for many of the defense’s questions, Johnson cited a lack of memory, despite the similarity in the questions that she had just answered for the prosecution.

After she was excused, prosecutors sought to call Johnson’s mother to bolster her testimony. The defense objected leading to a hearing after the court session ended.

Cosby is charged with three, second-degree felony counts of aggravated indecent assault, which carry a penalty of up to 10 years in prison.

“Cosby Show” co-star Keshia Knight-Pulliam arrived with the comedian to court on the first day.

Knight-Pulliam smiled slightly and, at times, shared light moments with Cosby and his assistant. Knight-Pulliam starred as fan-favorite Rudy Huxtable, the youngest daughter on “The Cosby Show.”

“Truth happens here,” Knight-Pulliam said with resolve in her voice, as she addressed reporters. “I am here, because true family supports even when things aren’t going so good.