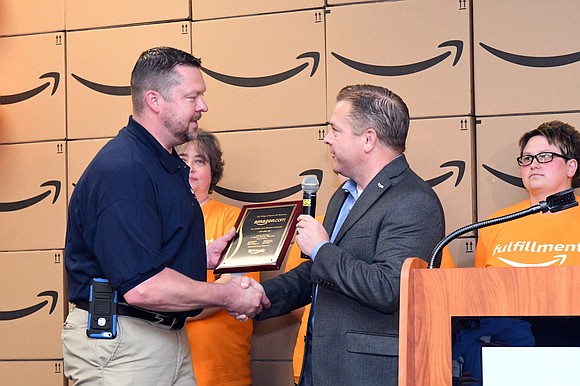 Romeoville Mayor John Noak hosts the grand opening of a new Amazon.com distribution facility in the village. Village of Romeoville

A 750,000 square foot Amazon.com fulfillment center that opened in Romeoville in September 2016, held its official grand opening on Thursday.

Noak proclaimed June 8, as Amazon.com Day in the village saying, “Amazon has had a tremendous impact on not only Romeoville, but the region as well.”

That regional impact includes a rapid expansion of fulfillment warehouse locations including 2 in Joliet.

The online e-commerce website announced the opening of its first Illinois distribution facility in Will County in August 2015. That first Joliet facility opened later that fall and was followed quickly by an expansion of the Laraway Road location.

All told, Amazon will employ more than 8,000 in the State of Illinois according to press materials from the e-tailer which plans to open its Monee facility as a well as one in Aurora later this year.

Joliet Township High School’s Cyborgs robotics club gave a demonstration before the start of the ceremony on Thursday. Amazon recently presented the team with a $5,000 donation to fund their trip to the FIRST Robotics World Championship in St. Louis.