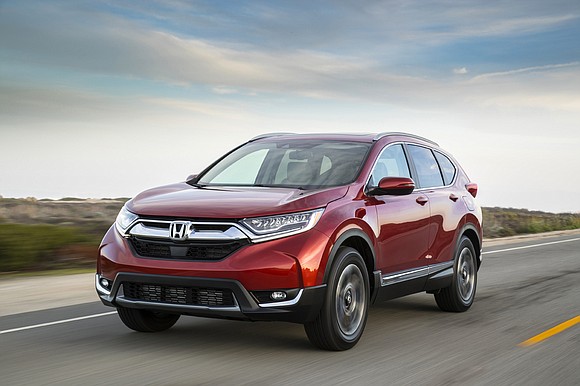 The Honda CR-V was completely redesigned and reengineered for the 2017 model year. As competition heats up in the compact sport utility market, the Japanese automaker is intent on maintaining its status as the bestselling compact SUV on the market for the least 20 years.

The fifth generation CR-V had its first ever turbocharged engine. It was a 1.5-liter four cylinder that made 190 horsepower and 179 pound-feet of torque. It was mated to a continuously variable transmission. The combination had an EPA fuel rating of 27 mpg in the city, 33 mpg on the highway and 29 mpg combined.

There is a 2.4 liter four cylinder available but the turbo packed a little bit more punch in terms of horsepower and torque. What’s more, the Honda CR-V comes in either front-wheel or all-wheel-drive. We had the AWD version.

Honda said the all-wheel-drive models have an upgraded system; something they’ve branded Real Time AWD. The system increased the maximum amount of torque sent to the rear wheels. That’s about as specific as the press material got but we had the CR-V AWD during the great spring-time snow storm and didn’t experience one slip of the wheels.

Although we’re not a fan of CVTs, the one that put power to the pavement on the CR-V was not bad. Under hard acceleration it was a bit loud but it responded to accelerator input smartly. In other words, it moved the crossover quickly when asked.

Ride and handling were good. The 2017 Honda CR-V suspension which also had been redesigned had a MacPherson strut front suspension and a multi-link setup in the rear and low friction dampers all round. The crossover had tubular front and solid rear stabilizer bars that Honda said promoted responsive turn-in and flatter cornering. The CR-V also had dual pinion, variable electric power steering.

That translated into a vehicle that handled well. It had a smooth but not cushy ride and the suspension took on the rough streets here without a lot of fanfare.

The front end of the 2017 Honda CV-R was edgier. The headlights were accentuated by LED daytime running lights and wider fenders. The crossover had a longer hood to go along with its longer wheel-base. The overhangs were short and it had a new dual exhaust.

There was an active shutter grille system that lowered aerodynamic drag and improved fuel economy. Narrower A-pillars improved visibility and it also made the interior more spacious. Inside the cabin the materials had been upgraded.

It was clean and concise. The infotainment screen looked like an iPad that had kind of been melded onto the dash. The instruments were digital and the TFT screen was in color. The layout looked more like a TV screen than instruments. Honda called it a driver information interface or DII. It was impressive.

Creature comforts included remote start, a moonroof, smart entry system, it would lock itself when you walked away, heated seats, heated sideview mirrors power seats for both driver and passenger and dual zone climate controls. There was the expected stuff: Bluetooth, satellite radio, a navigation system, dual zone climate controls, USB and auxiliary jacks as well as a 12-volt socket.

And then there was Honda Sensing. It included adaptive cruise control with low speed follow, collision mitigation braking, forward collision warning, lane departure warning, lane keeping assist and road departure mitigation. Thankfully, we had no need of that last one.