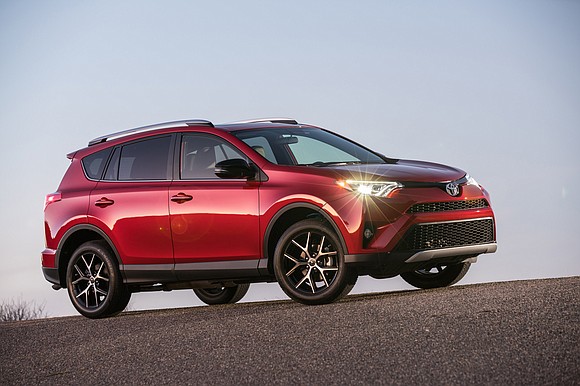 Toyota’s RAV4 is a benchmark in the compact sport utility market. And with time, it keeps getting better. For the 2017 model year the crossover gets some additions designed to make it better and that will surely keep pressure on its competitors.

First, you can now purchase a RAV4 Hybrid. It combines output from a 2.5-liter Atkinson-cycle four-cylinder engine and a small high-torque electric motor through its unique transaxle. Total horsepower is 194. The Hybrid comes with all-wheel-drive and will direct torque to the rear wheels using the electric motor when needed.

But the Hybrid is not the RAV4 that we tested. Instead, we drove the Platinum grade, which is now the top of the line. What’ve they’ve done is bestow on the RAV4 equipment normally found on premium and luxury models.

The bottom half of the dash was covered in soft touch material. Toyota calls it SofTex® and used the stuff to trim seats, dash, and door panels. There were heated seats but we were more impressed with the heated steering wheel.

Part of the new offerings was an eight-way power driver’s seat, a smart key with push-button start/stop and a remote power liftgate. In other words, you’ve got to push a button in the car under the dash or on the key fob.

That power liftgate was much appreciated as we used a small flatbed to roll a 91 lb. box out of Home Depot to the RAV4. We opened the tailgate as we approached and what we appreciated even more was the low lift over as we wrested the 17X29X28 box in the back. Even more impressive was that we could actually pick it up (not for long), that we slid it into the back and closed the liftgate without lowering the second row seats.

There was 38.4 cu. ft. of cargo capacity behind the second row seats. With the 60/40 split rear seats folded, that space expands to 73.4 cu. ft. The rear seatbacks reclined several degrees for added passenger comfort, and rear privacy glass is standard. The RAV4 can carry five passengers.

There were also foot-well ambient lighting, “plush” floor mats and Platinum-badged door sill protectors; none of which we noticed. Entune was standard so was the premium audio system which had an integrated navigation system and App suite. Our RAV4 had a five-door smart key which made a huge difference in terms of convenience.

The platinum RAV4 had a Bird’s Eye View camera with perimeter scan, a 360 degree overhead view in drive and reverse as well as a curb view. As with everything it is the little things. Our test vehicle had automatic bright lights. Which were really used one morning during heavy fog.

All-wheel-drive was standard on this trim line. The system takes input from various sensors (vehicle speed, steering speed and angle, throttle angle and yaw rate), then its Dynamic Torque Control continuously monitors and actively governs torque distribution to the rear wheels, as needed, via an electromagnetically controlled coupling positioned in the rear differential. Front to rear torque distribution can vary from 100:0 to 50:50, with front-wheel drive automatically engaged under normal driving conditions to help reduce fuel consumption.

That’s what Toyota said. Since it was still relatively cold here but the pavement was dry, we remained in front-wheel-drive. We didn’t explore the drives modes either. There were two: Eco and Sport.

Toyota also said when accelerating, Dynamic Torque Control automatically shifts to AWD to help prevent front wheel slippage, or when sensors detect wheel slippage. Torque transfer to the rear wheels starts from the moment the steering wheel is turned to reduce the load on the front tires in all Drive Modes. If wheel slip occurs, the system transfers up to 50 percent of torque to the rear wheels to reduce front tire loading, thereby enhancing lateral grip. Pushing an AWD Lock button fixes torque distribution at 50:50 at speeds up to about 25 mph to help maximize grip for off-pavement driving or slippery conditions. Above that speed, the system reverts to Auto mode.

The 2017 Toyota RAV4 was powered by a 2.5-liter four cylinder engine that made 176 horsepower and 172 pound-feet of torque. It was mated to a six-speed automatic transmission. It could tow 1,500 lbs.

It was easy to drive. It handled well. The suspension was not bouncy. And the interior was pretty quiet. Power was sufficient. If there was a downside, it was fuel efficiency. The 2017 Toyota RAV4 AWD got 22 mpg in the city, 28 mpg on the highway and 24 mpg combined.