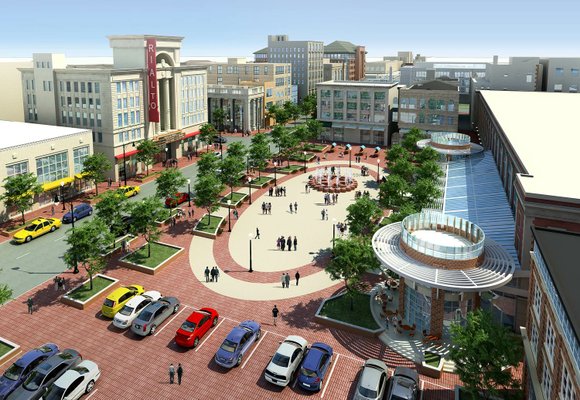 One rendering of what downtown Joliet could look like if changes were made to Chicago Street.

"Redeveloping Chicago Street as a modern city center is central to the revitalization of downtown," said Joliet City Center Partnership Chairman Bryan Kopman. "We host Downtown Joliet's biggest events along Chicago Street. Building a new urban plaza would allow the City to upgrade everything including better lighting and sound design that could go a long way toward making Joliet a premier entertainment destination."

This week the two entities came to terms on a property swap that will allow the city accomplish many of the goals of the Joliet Downtown Plan.

Will County has agreed to trade property with Joliet that will allow Chicago Street to open between Washington and Jefferson Streets. Joliet will also receive Van Buren Plaza, where the former State's Attorney building now sits across from the historic Rialto Square Theater. This location will be used to build a public square with new sightlines to other historic buildings, such as the Joliet Public Library Ottawa Street Branch.

The opening of Chicago Street will provide a link to the future multi-modal transportation center, create pedestrian and bike connections to downtown, and update the downtown streetscape.

In exchange for the Chicago Street and civic center properties, Joliet will transfer the former Metra parking lot, which is adjacent to the courthouse parking lot, to Will County. Officials have said the parking lot will be resurfaced, redesigned, and automated. Parking in the lot will also be available to the public for evening and weekend events at no charge.

Joliet recently received a Chicago Metropolitan Agency for Planning (CMAP) grant of $86,000 for the redesign and landscaping of Chicago Street. The City also contributed an additional $40,000 to that planning grant for the design of the expanded plaza.

The Joliet City Center Partnership, LLC was developed in the late 1980's in an effort to revitalize the downtown area and maintain existing structures that hold architectural and historical significance. The CCP strives to promote existing businesses while bringing the community together through family-friendly events that utilize our amazing location.