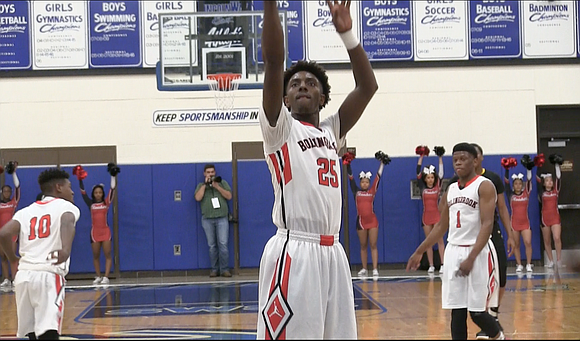 Bolingbrook forward Nana Akenten takes a free throw during his team's matchup in the sectional final against Joliet West. Photo by Alex Ortiz

The Bolingbrook Raiders (28-1) defeated Naperville North (25-5) in the Super Sectional game at Northern Illinois University on Tuesday night 83-57. That means Bolingbrook will move on to the IHSA State Semifinals in Peoria to face Chicago powerhouse Simeon on Friday, March 17 at 7:15 p.m.

The Raiders were dominant from nearly start to finish. They only led Naperville North by five points after the first quarter. Senior Bolingbrook center Malik Binns had himself quite a night with a double-double, 14 points and 11 rebounds. Kaleb Thornton led his team with 20 points.

This trip to state comes near the end of a season in which Bolingbrook has been the best team in the area, already defeating Joliet West for the Sectional title. Simeon will be quite the test though as Derrick Rose’s old team is ranked 1st in the state according to MaxPreps.com and owns a 26-3 overall record.

The semifinal game against Simeon will be aired on CSN Plus. The winner between Bolingbrook and Simeon gets the winner of the other semifinal matchup between Whitney Young and Fremd.