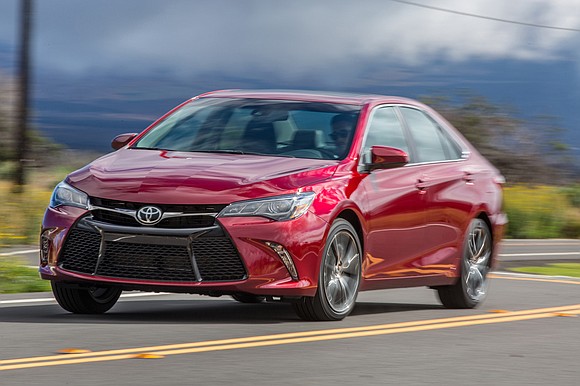 There’s a reason that the Toyota Camry has been the bestselling passenger car in the U.S. for 14 straight years: simplicity and reliability. And that is no different with the 2017 model, which represents the 7th generation of the front-wheel-drive sedan, which has been around for 35 years.

The 2017 Camry was an astute mixture of new and old technology. It had analogue instruments with a TFT screen between the odometer and the speedometer. And though it had a touch infotainment screen, the audio system had real dials for volume and tuning.

There were control buttons on either side of the information screen but that was it, save the climate control buttons, which ran lengthwise just beneath the infotainment screen. Beneath that was a doored storage bin that also housed 12 volt, USB and auxiliary jacks. There was also a switch to turn on wireless charging.

In the middle of the console was the gearshift lever and at the end were dialed controls for the heated front seats. And there was another 12-volt socket inside the console’s storage bin.

It was a simple straightforward and easy to use layout. There was no deciphering needed. This Camry had technology billed as safety and is making it available on just about all of its trim lines. There was a pre-collision system with automatic braking, lane departure alert, smart cruise control and automatic high beams.

While we’re at it, the 2017 Toyota Camry had what are becoming the usual creature comforts. There was satellite radio, Bluetooth, voice controls, a backup camera, push button start, a navigation system and Entune with its suite of mobile apps.

We climbed into the back seat and found the space to be spacious. There was plenty of headroom, legroom and hip room was commendable. We think three adults could get in the back seat of a Camry and ride in relative comfort.

The doors were concaved which widened the interior space. About the only thing we found to quibble about was the ultrasuede read suede-like cloth interior. It was light gray and that included the floor mats. We just don’t see it holding up in terms of cleanliness for the long haul, which means years, at least not here or Denver or Chicago or other places with winter weather. But that is not a structural deficiency or design engineering flaw; it is a matter of color. Pick a darker one.

We had the XSE trim line. It was powered by a 3.5-liter V6 engine that made 268 horsepower and 248 pound-feet of torque. Mated to a six-speed automatic transmission, the combination was as quiet and smooth a powertrain as you’d find outside of the luxury segment. It had an EPA rating of 21 mpg in the city, 30 mpg on the highway and 24 mpg combined.

The Camry was relatively quick, easy to handle and it had a really smooth ride. Toyota used stabilizer bars on the MacPherson strut front suspension and on the dual link rear suspension. On streets that suffered from early potholes because of unexpected warm weather, the suspension smoothed out the bumps, ruts and ruddy surfaces.

The sedan was equipped with LED headlights, 18-inch alloy wheels and an acoustic windshield. The 2017 Toyota Camry continues the sedan’s reputation for comfortable transportation that is dependable at a reasonable price. Our test vehicle was $34,165.