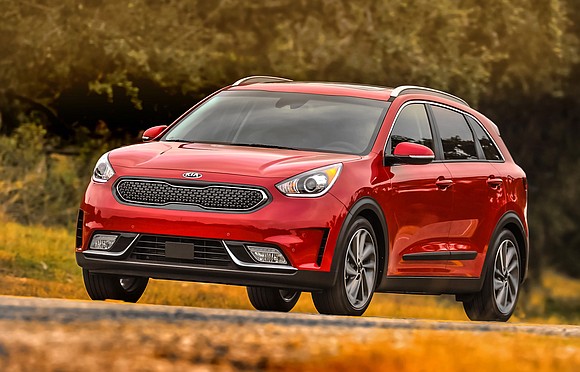 With its no-compromise combination of head turning style, cutting-edge technology, real-world utility and eye-popping fuel economy, the 2017 Kia Niro truly is a smarter kind of crossover.

That’s how Kia described its new hybrid electric crossover in a welcome letter to reporters here for the media launch of the 2017 Kia Niro Hybrid. Beauty is in the eye of the beholder but the Kia Niro did look good.

A static model was parked in front of the Hotel Emma and at a leisurely pace we saw that the crossover had short overhangs, aggressive headlights, and Kia’s tiger nose grille that seemed a little wider and black cladding that framed the edge of the vehicle’s lower body as well as its wheel wells. We particularly liked the trim bezel for the fog lamps and it also adorned the rear fascia.

The Niro was designed from the ground up as a hybrid. Stylists made it wide and low and it had a long wheel-base and an athletic stance. The crossover had strong shoulders, well defined wheel arches, rocker-panel cladding, and roof rails. In the rear it had a wide stance, rear skid plate, and multi-element horizontal LED tail lamp graphics.

Kia worked hard at reducing NVH. It used specially designed engine mounts, equal length drive shafts and dampers inside the steering wheel hub minimized vibrations. Foam in the A and B pillars helped to keep road noise out of the passenger cabin. More than half the body in white was made of advanced high strength steel. Special tires and acoustic glass were also used to reduce noise in the cabin.

The Niro model in front of the hotel had a stance which created a slightly forward lean and it looked like it was cutting through the wind. Its tailgate was curved, almost round. The side mirrors were attached to the A pillars but they weren’t obstructive.

The color was great. A metallic Gravity Blue. It was rich, the sort of hue you’d find on a large luxury sedan. Kia sales were up 3.5 percent while the overall market was up less than one percent. That’s significant since the brand does not have a pickup truck or large CUV. And the company undoubtedly expects continued sales growth with the Niro, the first of 20 all new vehicles that will be launched by 2020.

The Niro is special. It averaged 76.6 mpg on a coast to coast cross country drive, using about 4.4 tanks of fuel. And that Niro was just like the one they brought here. It had a 1.6-liter direct injected four-cylinder engine that made 104 horsepower.

Kia said the new engine marks the first combination of the Atkinson Cycle, cooled exhaust gas recirculation (EGR), GDI and a long-stroke-narrow-bore specification to maximize fuel efficiency to up to 50 mpg combined.