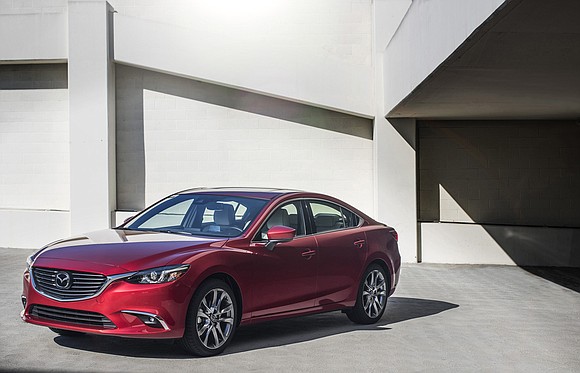 As soon as they dropped off the 2017 Mazda6, we were headed down Hwy 14 to connect with I-94 West and on to Chicago. Once we were clear of the expressway like traffic, we set the car’s adaptive cruise control on 78 mph and settled in for what turned out to be an uneventful drive.

The Mazda6 had a 2.5-liter four cylinder engine that made 184 horsepower and 185 pound-feet of torque. It was mated to a six-speed automatic transmission. Mazda says the car has a top speed of 137 mph and indeed it felt like we could have cruised at least 10 mph faster but we were content to maintain pace with other traffic.

For 2017, automatic headlights had been added to our touring package as well as rain sensing windshield wipers and Smart City Brake Support. At speeds less than 20 mph a windshield mounted laser is able to sense when a car is in front of your Mazda. If there is a risk of collision, the brake system delivers emergency stop braking power if evasive action is not taken by the driver. As the brakes are applied engine output is also reduced to lessen the severity of the impact.

This system is designed for city-driving, thus, it really didn’t come into play on the Interstate. That’s where the 2017 Mazda6 felt right at home. The front-wheel-drive sedan had a MacPherson strut front suspension and a multi-link type coil spring and stabilizer bar set up in the rear. There were also twin tubed shock absorbers.

The electric rack and pinion power steering system was tuned pretty well. Though there was little feedback, the car tracked well. We rarely had to adjust the steering wheel because the Mazda6 had wandered off course. It pretty much stayed where we pointed it.

Inside was roomy; equipment was easy to read and to reach. This really was an intuitive interior. Three dials in front of the driver readout speed, RPMs and the third dial included the fuel gauge as well as other information that could be changed by the driver.

An infotainment touch screen was perpendicular to the dash and the climate controls were beneath it. And then there was the center console which held the gear shifter. It was a clean layout. About the only thing we found to quibble about was it was a bit involved to change radio stations.

The front seats were comfortable. There was plenty of room in the back seats. Though the Mazda6 is listed as a five-seat sedan, the car can carry four adults in comfort; a fifth person in the back seat would be a squeeze.

Upon arrival in the Windy City, we still had a half tank of fuel. The car had an EPA rating of 27 mpg in the city, 35 mpg on the highway and 30 mpg combined. It took roughly eight gallons of gasoline out of the 16.4 gallon take to take us from our door to the door of our hosts, 273.1 miles away.

Once in Chicago, we discovered that the 2017 Mazda6 had some urban spunk. The car was pretty quick off the mark, or in this case pulling away from stop lights. Sight lines were not obstructed; streets can get pretty cluttered on the near Northside.

And the car handled the curves of Lake Shore Drive adequately. The speed limit on most of it is 45 mph, at least that’s what the signs say but you’ve got to do 60 mph or more to keep up. Throw in a traffic light here or there downtown and you’ll stay on your toes.

The car had an assortment of equipment. Blind spot alert, rear cross traffic alert which came with its rearview camera, a navigation system, a smart key and push button start, satellite radio, Bluetooth and a moonroof. The 2017 Mazda6 even had a traffic sign recognition system.