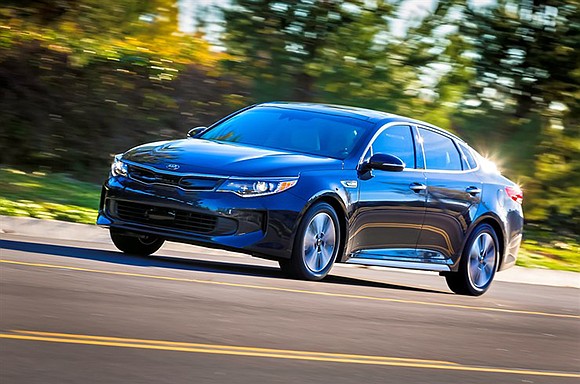 The first thing we noticed about the 2017 Kia Optima Hybrid was its smoothness. This sedan was really silky on the road.

It was powered by a new 2.0-liter direct injected four cylinder engine that was rated at 154 horsepower. It was mated to a six-speed automatic transmission. This is the second time we’ve come across a hybrid with transmission gears instead of pulleys putting power to the pavement. Consumers have yet to warm up to continuously variable transmissions (CVTs) no matter their fuel saving attributes.

Anyway, Kia used a 38 kW electric motor and clutch to replace the torque converter to provide strong off-the-line acceleration and power assistance to the engine when necessary. That comes straight out of the press information. But we can say that the second thing that impressed us about this car was its power. It didn’t have the docile feel of a regular hybrid. It had the driving characteristics of a gasoline powered sedan. Total powertrain output was 193 horses.

Powering the electric motor was a lightweight, high density lithium-polymer battery pack with a 13 percent increase in capacity to 1.62 kWh. Kia said improved packaging, the battery fit under the trunk floor and didn’t encroach on cargo space, allowed for a 60/40 split backseat. That’s important in a family sedan.

In effect, Kia tore out the guts of the Optima’s hybrid powertrain and replaced it with something that was lighter and more powerful and more fuel efficient. That certainly showed in the car’s driving characteristics and on the gas needle.

Our test car had an EPA rating of 39 mpg in the city, 46 mpg on the highway and 42 mpg combine. That’s exceptional for a midsize sedan. And this midsize sedan looked like an Optima. It had the same styling and the tiger nose grille was prominent but it was active, automatically opening and closing at high and low speeds.

There were a few other differences. A model-specific front air curtain, a beveled rear bumper, a rear diffuser designed to streamline airflow by shrouding the exhaust tip, and an aerodynamic alloy-wheel design were exclusive to the hybrid. As Kia said, they were complemented by modern LED lighting, satin finish accent trim and special ‘EcoHybrid’ badging.

Inside, we thought the passenger cabin was sedate but not boring. It had a power readout and charging dial where the odometer would normally be. Soft touch materials were used on the dash and the doors. And real stitching was used on the edges and the seams.

Kia was one of the first automakers to move to a horizontal layout versus a vertical center stack. Horizontal layouts create width and that creates a sense of more space. The Optima’s interior layout was clean, simple and easy to use. What’s more, there was plenty of space in the backseat. Two adults could occupy the rear seat comfortably; there was plenty of head space and ample legroom.

There were hands free trunk opening, a wireless phone charger and surround view monitoring to help with parking. Of course, there were the usual creature comforts: satellite radio, USB and auxiliary jacks, heated and cooled front seats as well as a heated steering wheel, a moonroof, Bluetooth, voice controls, a navigation system and the third generation of Kia’s UVO infotainment system.

It featured UVO telematics, and was enhanced with Android4 Auto™ and Apple5 CarPlay®, which allowed us to access a suite of core functions from our smartphone. With a $30,990 base price, the 2017 Kia Optima Hybrid was a smart sedan.