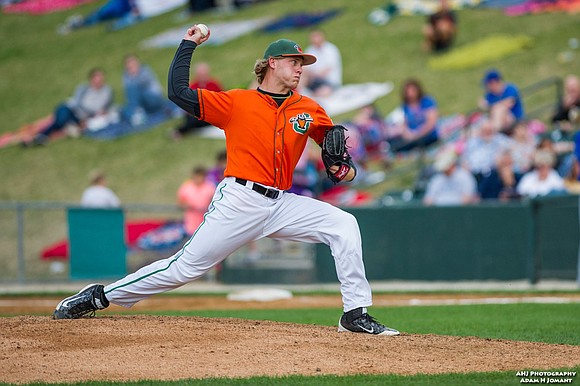 JOLIET - The Joliet Slammers presented by ATI Physical Therapy are

proud to announce pitcher Kaleb Ort has signed with the New York Yankees.

Ort signed a minor league deal with the Yankees and will report immediately.

During this season’s Slammers exhibition games, Ort has been throwing 95-97

MPH with an above average slider.

In September 2016, Ort was signed by the Arizona Diamondbacks and was

assigned to their Arizona League Affiliate.

Before coming into professional baseball, Kaleb Ort played baseball at

Aquinas College in Grand Rapids, Michigan. Throughout his collegiate

a.m. both Wednesday and Thursday against Traverse City and head into the

weekend with a series against the Schaumburg Boomers.

and More on the concourse for autographs and pictures. Post-game fireworks

Tickets can be purchased online at jolietslammers.com or at the Box Office

Therapy play at the Slammers Stadium downtown Joliet, Illinois, and are

members of the professional, independent Frontier League. The Frontier

the Slammers online at www.jolietslammers.com or call the ticket office at