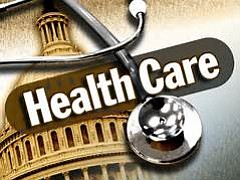 As Washington politicians push for changes to federal Law, which would strip insurance from people with pre-existing conditions and

massive insurance companies from gouging middle-class families and ensure no one can be denied care because of their medical history.

would deny health care to tens of thousands of Illinoisans, allow big businesses to

said. “During these times of uncertainty, I want to ensure our residents with

pre-existing conditions will still be able to receive the care they need.”

Walsh backed a series of reforms that will block insurance companies from raising premiums simply to pad their corporate profits and from denying care to individuals with preexisting conditions, regardless of what politicians in Washington do.

Walsh voted to pass House Bill 2624, which would protect middle-class families and

seniors from the double-digit rate increases that many see year after year. His

measure creates an independent Health Insurance Rate Review Board which will

scrutinize proposed insurance premiums and block unjustified increases intended only to increase corporate profits at the expense of consumers.

conditions like cancer, diabetes or heart disease. While Washington politicians

continue fighting to repeal federal protections for these at-risk individuals,

Illinois from discriminating against the sickest, oldest and most in need of care.

The legislation passed the House with bipartisan support.