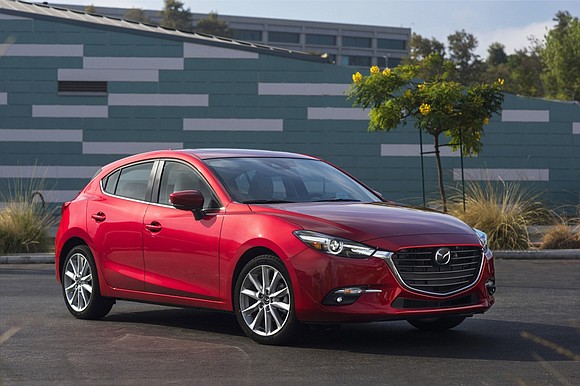 We got into the 2017 Mazda3, put our foot on the brake pedal and turned the ignition key and nothing happened. We looked at the instruments for some sort of signal, nothing, so we did it again and got the same results. Then we noticed the gearshift and our eyes widened with anticipation. The car was a six-speed manual and we remembered that we had to press down on the clutch pedal too for it to start.

The 2.5-liter four-cylinder sprang to life and we knew that we had a week’s worth of spirited driving in front us. This car was not a speed burner but it had enough oomph to make driving fun.

The engine made 184 horsepower and 185 pound-feet of torque. That doesn’t sound like much but weighing in at 3,046 lbs. It didn’t take that much power to move this Mazda3 smartly.

It was fuel- efficient too. The car had an EPA rating of 25 mpg in the city, 33 mpg on the highway and 28 mpg combined. The 5-door Grand Touring moniker spoke to the trim line and the number of doors. Heated seats and a heated steering wheel were among the creature comforts. And the fifth door was actually the hatchback.

The compact Mazda3 was small, maneuverable, it had a turning radius of 17.3 feet and it was comfortable. For 2017, it got a new side mirror design, a new rear bumper design, LED fog lights and a standard rearview camera. It also had advanced blind spot warning. We would hear a beep whenever we wanted to change lanes but there was a vehicle in our bind spot and it was too close to do so safely.it Brake Support (SCBS) and Advanced Blind Spot Monitoring with Rear Cross Traffic Alert

We also had something Mazda called smart city brake support and we’re grateful that there was no need to experience the system. Between 2 mph and 19 mph, the system would automatically apply the brakes during emergency situations to lessen the severity of the impact in an impending collision. Our trim level came with the ability to recognize traffic signs; there was also lane departure warning, lane keep assist, automatic high beams and adaptive front lighting.

The interior was comfortable, simple, easy to use and straightforward. There was a new steering wheel design, a new center console was styled to be more flexible and the car had perforated leather seats. What’s more the front door storage pockets had been expanded. There was also an electronic parking brake.

The Mazda3 was easy to drive. The manual transmission allowed for more driver control on the road and a better feel of the road. The new 18-inch rims and tires added to its sporty look.

And the engine power coupled with the manual transmission gave the Mazda3 a great getaway from stoplights response, up shifts were just about effortless and so were the downshifts.

Of course, there was a navigation system, Bluetooth for hands free phone use, voice controls, satellite radio and adaptive cruise control. The car was quiet, the suspension smoothed out the ruts in the road, while the handling allowed easy avoidance of potholes.