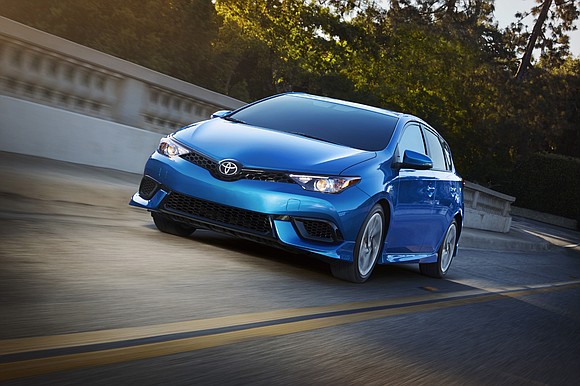 When Toyota folded its Scion brand it folded several of its cars into the Toyota fold. That’s a lot of folds but to put it simply there is now a 2017 Corolla iM.

It was a compact five-door hatchback powered by a 1.8-liter four cylinder engine that made 137 horsepower and 126 pound-feet of torque. There is a six-speed manual but our engine was mated to a continuously variable transmission that feigned shifting.

The iM got 28 mpg in the city, 36 mpg on the highway and 31 mpg combined. It could also be put in sport mode, which altered “shift” points and provided a livelier feel. Steering was more responsive and so was the accelerator response. That was surprising on a CVT, which technically has no gears.

The 2017 Corolla iM handled really well. It had a MacPherson strut front suspension and a double wishbone setup in the rear. Cornering was good, the car did a reasonable job of smoothing out the ruddy roads left here in the wake of winter and it got around some out of place potholes with no problem.

It had a clean interior layout. We had the bare bones version of the Corolla iM. There was no satellite radio, no navigation system, no sunroof and no push button start. However, it did have Bluetooth and it would reach out and grab Pandora off our cell phone. We thought this was pretty cool since we never manually connected the cell phone to the car. And it had USB and iPod jacks, a backup camera and driver side knee air bag.

The car had an angular face with a hexagon grille, sharp-eyed headlights and side bezels with a honeycomb mesh pattern. The grille was black and the Corolla iM had a standard sporty body aero kit, LED daytime running lights and distinctive taillights.

Small cars and cheap used to go hand-in-hand but not anymore. The Corolla iM used top notch materials in the interior. It had a layered dashboard and everything was easy to reach and easy to use. The car was pretty quiet, that is not a hallmark of small vehicles. But Toyota used an acoustic layered windshield, foam insulation and floor silencer sheets and the combination did a pretty good job of keeping outside noise from entering the cabin.

Because of the more or less flat roof, there was plenty of headroom in the back seats which were 40-60 split. This would be a great car for a young first time buyer, or for an older person or couple who don’t need a bunch of space and want to get from point A to point B.