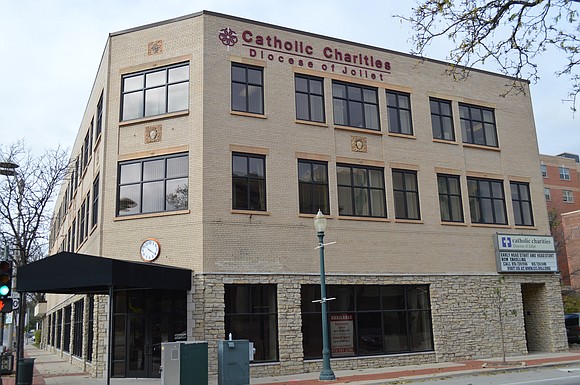 The former Catholic Charities building on Ottawa St. in Joliet will be redeveloped for mixed use including a first floor space an upscale restaurant.

The City of Joliet has approved a re-development agreement for the former Catholic Charities building at 201 N. Ottawa St.

Developer John Bays said that he plans to renovate the lower and first floors as well as 5,000 square feet on the 2nd floor for the mixed use building.

Under the terms of the agreement the city will rebate the incremental property taxes in from the TIF district over the course of the next 23 year and will waive the construction impact fees. A city memo outlining the project shows that the additional work will require another $1.9 million investment for a total of $4 million when all of the is completed.

Bays said that he was currently seeking to attract a major restaurant as a tenant for the first floor space and was taking more time than usual to find the right fit for the spot.

“So I’m stalling a little bit to try to land the right person,” said Bays.

“I’m trying to do something kind of special with this building,” he said.

Bays has also developed about 650,000 square feet of properties including the First Midwest building in Joliet’s downtown. He said he’s spoken to about 8 potential restaurant tenants but was meeting with two this week one of which he said he would be “really be happy to have move in there.”

One sticking point has been the re-opening of Chicago Street, a joint venture between the city and Will County that is under way but most likely won’t be complete until the spring. He said many big name restaurants are waiting to see the project completed before committing to come to the downtown.

Despite his and other officials assurances that “its going to open for sure”, “they want to see it happen,” he said.

Bays told the city council on Monday that the re-opening of Chicago Street would also have the benefit of bringing more traffic.

“We need traffic downtown,” he said.

In addition to courting a big name restaurant for the first floor, Bays said that he also has a “billion dollar company” that has agreed to move its operations in to one of his properties. He said that the second floor space at the Ottawa Street location would be ideal but is currently occupied by Catholic Charities.

However he said, “They’re coming for sure.”