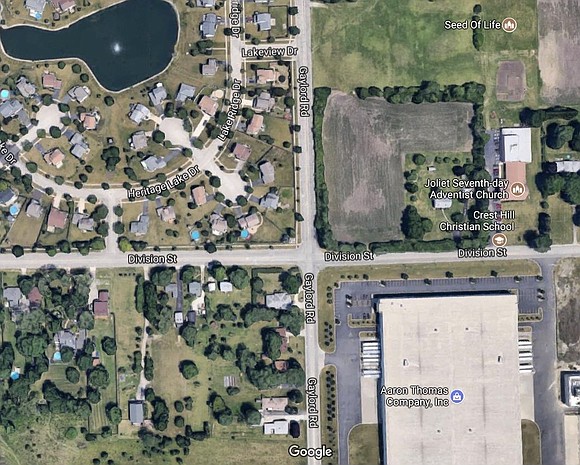 The City of Joliet has denied approval of an intergovernmental agreement with the City of Crest Hill for intersection improvements at Gaylord Road and Division Street. Google Earth

In October, the Joliet City Council denied the approval of an intergovernmental agreement with the City of Crest Hill for a road improvement project at the intersection of Gaylord Road and Division Street.

Under the terms of the proposed agreement, Joliet would have been responsible for maintenance costs of a new traffic light on the city’s side of the intersection, the north leg of Gaylord Road and the west leg of Division Street.

City Council member Larry Hug said that residents on the Joliet side of the boundary were unhappy with Crest Hill’s decision to construct an industrial park across from residential neighborhoods. Hug said that Joliet’s request that Crest Hill route truck traffic to the east on Weber Road was also denied.

So, while the City of Crest Hill would have shouldered the 20% local cost of engineering and construction for the road improvements including new traffic light installation and a realignment of the intersection, the city council voted 5-2 to deny the agreement.

This week, Mayor Bob O’Dekirk said he had met with Crest Hill Mayor Ray Soliman when he learned that there had been a verbal agreement to support the project.

“There was always a gentlemen’s agreement between Crest Hill and Joliet,” said O’Dekirk who asked the city manager to bring the agreement back before the council to be reconsidered.

O’Dekirk said that the agreement that was voted down in October was something that a previous city administration had “told Crest Hill 10 years ago we were going to do.”

The city’s Public Works Director Jim Trizna said that he knew of the verbal agreement and about the plan to align the intersection and add the traffic lights.

“That was always agreed to,” Trizna confirmed during Tuesday’s city council meeting. Trizna said that Crest Hill agreed to pay the 20% share of construction “If Joliet would go and maintain that traffic signal.”

O’Dekirk said that the city should honor the agreement noting the added traffic signal that will benefit Joliet motorists.

“The traffic signal does affect our residents in a positive way,” he said.

Council member Larry Hug disagreed with the request to reconsider the agreement saying that residents living on the Joliet side still have to contend with heavier industrial traffic and that the project still disproportionately benefits Crest Hill.

“That light doesn’t benefit the neighborhood as much as it benefits their industrial warehouse project,” said Hug who called in to question who the Joliet official was that made the agreement. He said that the residents he has spoken to do not favor helping Crest Hill with any tax payer money.

“I’ve talked to the residents,” said Hug, “they don’t want to pay, not one penny, to help the project that they were vocally against.”

Crest Hill Mayor Ray Soliman said this week that the agreement with Joliet was made in 2014 during a meeting between Trizna and Crest Hills’ former administrator and public works director.

“The agreement was that the city of Crest Hill would pay for all of the improvements at the intersection and that the City of Joliet would do the maintenance on the traffic signal,” said Soliman.