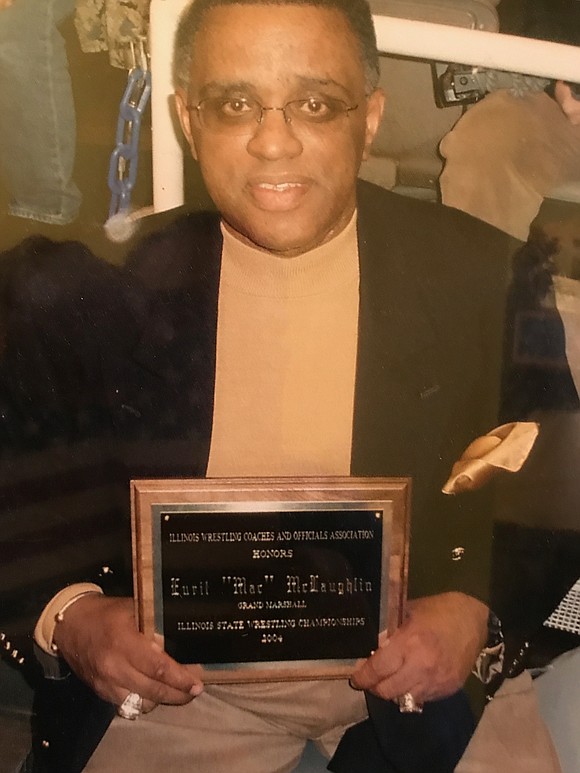 a legacy amongst generations of students, alumni and families.

will be presented to Mac during a special Honors Banquet at 3 p.m. on Sunday,

October 22 at the Holiday Inn in Countryside, 6201 Joliet Road.

A graduate in the top 10 percent of his class from Chicago (Dunbar), Mac McLaughlin

earned varsity letters in football, wrestling, baseball and track. He was a state

qualifier in wrestling his senior year.

Mac went to North Central College in Naperville and graduated in 1964. He won

varsity letters in football, wrestling and baseball. He was named to the North

Central College All-Century Football team in 1998 as a defensive back. He was also

inducted into North Central’s Hall of Fame. Mac went on to play one year of

professional football in the Canadian Football League with the Saskatchewan Rough

In 1966 Mac began his teaching and coaching career at Joliet Central High School.

He earned the name Coach Mac once he was hired as Physical Education instructor,

dean and coach. He has coached both male and female sports as a head coach or an

assistant coach during his 43 years in education. He was the head football coach

for the 1976 season. In 2000 he served as an assistant coach for Joliet Central’s

Coach Mac was the head wrestling coach at Joliet Central from 1970 to 2010. He was

inducted into the IWCOA Hall of Fame in 1991.

Mac has also worked as a state tournament bench official since 1996. He was named

“This is quite an honor, and something you dream about,” said Mac. “My family is

nights and weekends I spent coaching.”