We must take every opportunity to fight voter suppression 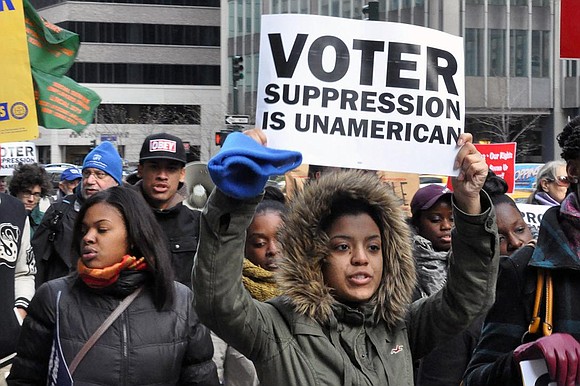 We all know the power of the vote.

One person, one vote serves as the basic ethos and measurement of any democratic nation. Without true voter protection, integrity and universal access, America’s light on the hill dims.

Since Shelby V. Holder dismantled the Voting Rights Act, many southern, states with a history of voter suppression and related oppression of Black communities, could, once again, enact laws that would attempt to manipulate the sole entity which made all Americans equal: the vote.

During the Presidential election of 2016, the first in 50 years without full protection of the VRA, six of the 14 states implementing restrictive voter laws were previously covered by Section 5 of the VRA. Additionally, five of those states—Mississippi, Texas, South Carolina, Alabama and Virginia—put in place new voter ID laws.

Since 2010, twenty states have placed additional obstacles to the ballot box and according to the Brennan Center for Justice, “states most likely to pass new voting restrictions were those with the highest African-American turnout in 2008, those with the highest Hispanic population growth between 2000 and 2010, and/or those formerly covered under Section 5 of the Voting Rights Act.”

In 1858, when running for the U.S. Senate from Illinois, Abraham Lincoln said:

"A house divided against itself cannot stand. I believe this government cannot endure, permanently half slave and half free. I do not expect the Union to be dissolved—I do not expect the house to fall—but I do expect it will cease to be divided. It will become all one thing, or all the other…”

Lincoln would go on to lose that election to Stephen A. Douglas, but the words he uttered would last the test of time. Today, we ask the same question: Can a nation half-slave and half-free continue?

It’s the same question athletes like Colin Kaepernick ask when they are singled out for freedom, yet their brothers remain in chains. If the vote is actively suppressed in communities of color and poor communities, are we really free or just half-free?

Sometimes history will repeat itself, if we give it enough time and a little help.

What is the difference between our present, partial believers in democracy, who callously promote gerrymandering, mischievous voter ID laws, poll moving and poll closing or voter purges, and those who engineered the post-Reconstruction elimination of Black Power in the South?

During the first post-Civil War election in which Blacks could vote, they provided 700,000 votes to help elect Ulysses S. Grant to the White House in 1868. The often-untold secret is that before the Civil Rights Era, where Black voters in the South once again sought out the ballot box in greater numbers, we stood ready at the first opportunity to use the vote, when treated as free people. At that time, and clearly to some today who seek to suppress the vote, this was not acceptable.

During the 1898 constitutional convention in Louisiana, Thomas J. Semmes, chair of the Judiciary Committee of the Convention and former president of the American Bar Association said, “We (meet) here to establish the supremacy of the White race, and the White race constitutes the Democratic Party of this State. The Convention of 1898 interpreted its mandate from the people to be, to disenfranchise as many Negroes and as few Whites as possible."