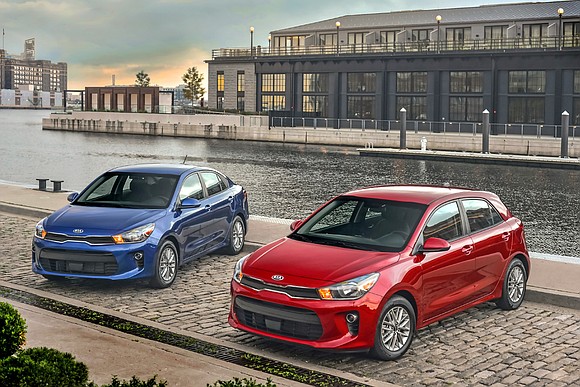 Kia’s Rio is not what it appears to be. Submitted photo

Kia’s Rio is not what it appears to be. It’s small, conservatively styled, doesn’t have oodles of power under the hood and after the restyle for 2018 it pretty much held on to those attributes. But it is the most important vehicle in the automaker’s lineup.

That’s right, globally; the Rio is Kia’s best-selling vehicle. And for 2018, the Korean automaker intends to keep it that way. There are two versions of the Rio, the five-door hatchback and four-door sedan. I and my driving partner latched on to the hatchback so that’s where my driving impressions will focus.

This is the fourth generation of the Rio. Designers gave it crisper lines, a slender tiger-nose grille and swept back headlights for a more aggressive appearance. The fog lamp surrounds were moved outwards to give the car a wider look to the front fascia and a lower window line around the cabin provided a better view.

Both cars were a little longer, wider and lower than the models they replaced. The wheelbase had been lengthened to 101.6 inches and the A-pillars were more upright. The creased shoulder line ran from front to back; the intent was to make the subcompacts look sleeker, longer and give them a more substantive look.

In the rear, the Rio looked more upright because of shorter overhangs and thinner taillights. That’s what Kia said. But the automaker continued its quest to make the Rio look wider which it did. The 15-inch wheels were pushed to the corners and that certainly helped road stability.

The interior did not look cheap and that is saying something for a car that starts well under $20,000. The materials had been upgraded and the cabin had been redesigned to accommodate a new range of technology as Kia put it.

Inside there was a simple and pragmatic layout. Lines and creases were used to make the interior appear wider. The odometer and speedometer were in front of the driver and there was a TFT screen between them that provided more information for the driver. The infotainment screen sat out about an inch and a half from the dash, adding some depth to look of the car.

There was no navigation system; either Apple Car Play or Android Auto can be used to download navigation from a smartphone. The car had Bluetooth, satellite radio, voice controls and a rearview camera system.

In the press materials, Kia boasted about the Rio being more spacious, having more headroom, legroom and shoulder room. I’ll spare you the dimensions in cubic feet and just say that my driving partner was 6’9” tall and he had enough head space as not to feel cramped.

The was plenty of room for his left leg with the dead pedal but his right leg was little cramped because of the brake and gas pedals, as he said it is in just about the same in every car that he test drives. And there was plenty of elbow room for both of us in the five-door hatch.