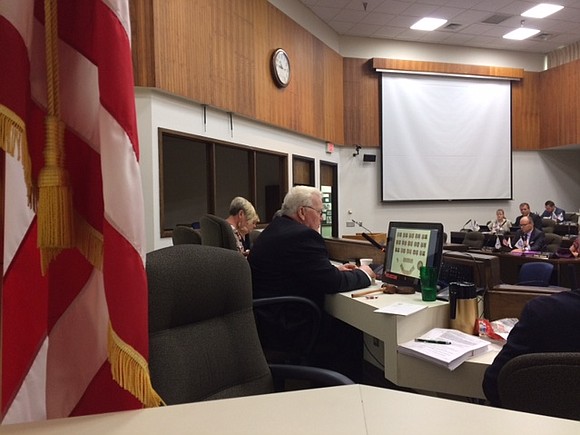 Will County Board Photo by Brock A. Stein

Following the release of his proposed FY 2018 budget to the Will County Board, County Executive Larry Walsh again renewed his call to eliminate the Will County Public Building Commission (PBC) despite opposition from Will County Board leadership. Walsh said this move supports the county’s continued efforts to consolidate government services and improve efficiency.

"What has become a common theme among many of my collar county colleagues that County leaders must chart the path forward on reducing the number of governmental units, especially those that no longer serve a useful purpose,” said Walsh. “I believe the Will County PBC has served the residents of Will County well in the past but there no longer seems to be a need for this separate governmental entity. I think we should set an example by eliminating this unnecessary taxing body."

Walsh noted the PBC previously provided oversight on major capital construction projects such as the expansion of the Will County Adult Detention Facility (ADF) and the construction of the River Valley Justice Center (RVJC), which serves youth who have been incarcerated. However, in 2016 the County Board decided to move the oversight of the major capital projects currently underway to the County Board’s Capital Improvements Committee, which further reduced the duties of the PBC.

“The decision of the County Board to directly oversee these projects gives both board members and the general public greater access to the information than they ever had before,” noted Walsh. “The board’s online board management agenda system allows current agenda information to be viewed easily and this supports our goal of continuous improvement of transparency and openness on county projects. Unfortunately information at the PBC was not as readily available to the public in the past.”

Walsh said in the FY 2017 budget, a significant portion of the property tax levy for the PBC was reallocated and used to pay for bonds to support the construction of the new County Public Safety Complex and the eventual construction of a new modern, efficient Court House in downtown Joliet. With the FY 2018 budget, Executive Walsh has proposed that the remaining property tax levy currently designated to the PBC be eliminated and transferred to the Will County Health department to support mental and behavioral health programs that have been hit by recent state budget cuts. This action would involve permanently shutting down the PBC and eliminating one taxing body found on the annual property tax bills.

“Whenever you are creating a budget, you are forced to prioritize among a number of competing concerns,” said Walsh. “In this case, I think it is a much wiser decision to eliminate a layer of government and instead put these critical property tax dollars towards services that directly provide essential services for our residents. We know that without some of these key mental and behavioral health services, patients could unnecessarily end up in local emergency rooms, the county jail, or on the street.”

“I remain hopeful that the County Board members, will review my proposals more closely and we can have a thorough dialogue on how to move Will County forward during difficult economic times largely created by the actions in Springfield and Washington,” said Walsh. “Our residents deserve better and I am hopeful we can move forward in a positive manner.”

The County Board’s Finance committee will hold their next meeting on Tuesday, October 17th, where they will review proposed expenditures and move towards a November approval of the FY 2018 budget, which begins December 1, 2017.