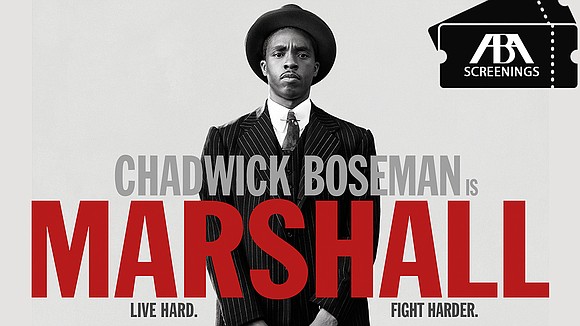 On June 13, 1967, when President Lyndon B. Johnson appointed Thurgood Marshall as the 96th Associate Justice of the U.S. Supreme Court, he said, "it was the right thing to do." Submitted photo

On June 13, 1967, when President Lyndon B. Johnson appointed Thurgood Marshall as the 96th Associate Justice of the U.S. Supreme Court, he said, "it was the right thing to do, the right time to do it, the right man and the right place." That seems to sum up in a nutshell the entire life and career of Thurgood Marshall, who by all standards should be considered a Super Hero of the Civil Rights Movement. That point is brought home in thunderous clarity and in brilliant storytelling, cinematography and directing in the Open Roads film Marshall, which opens the 53rd Chicago International Film Festival this week on Thursday, October 12 at the AMC River East Theatres and the following night, October 13 in theaters everywhere nationwide. The film stars Chadwick Boseman, no stranger to super hero roles himself, having played Marvel's Black Panther in Captain America (2016), a role that he will reprise in Black Panther and Avengers: Infinity War, with scheduled for release in 2018. Director Reginald Hudlin of the famous Hudlin Brothers directing team is a native of Illinois and is credited with the breakthrough hip hop comedy House Party (1990) ands the first African American animated series Bebe's Kids and Eddie Murphy's blockbuster comedy Boomerang. The story involves the 1941 case Connecticut vs. Spell, in which Marshall, as the fledgling assistant council for the NAACP is called upon to defend a black chauffeur, Joseph Spell played by Emmy winning actor Sterling K. Brown (Christopher Darden in The People vs. O.J. Simpson), accused of raping a white socialite, Eleanor Strubing played by Kate Hudson. Read more at thetimesweekly.com